From Yugipedia
Jump to: navigation, search
This article is about the character. For the card, see "Grandpa Demetto" (card).

Grandpa Demetto is a character appearing in the Yu-Gi-Oh! ZEXAL manga.

It is unclear exactly who or what Grandpa Demetto was, as his origin was never explained. When Cologne Duels Yuma Tsukumo, Grandpa Demetto appears as a part of her Field "Doll House", "fixing" Cologne's destroyed "Doll Monsters". She says that if Yuma "breaks" her dolls, Grandpa Demetto will fix them for her. When Yuma's friends make bad comments about Demetto's appearance, Cologne screams that Grandpa Demetto is always doing his best to fix the dolls, and that she won't allow them to treat him as a fool.[1] 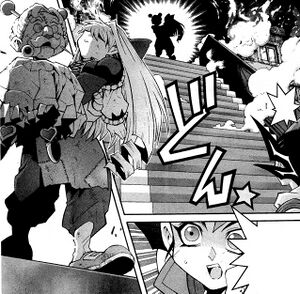 After Cologne lost her Duel against Yuma, she was knocked into the Doll House, which was on fire due to Yumi's winning attack. Cathy tried to save her, but in her haste she mistakes one of Cologne's dolls for Cologne instead. Yuma decides to go save Cologne, but suddenly Grandpa Demetto emerges from the Doll House carrying Cologne in his arms. Cologne's soul was supposed to leave her body, but Demetto gave her his own soul, keeping her alive. Demetto sends Cologne out of the fire towards Yuma, but is engulfed by the flames together with the Doll House. Cologne mourns his death, saying that she loved him.[2]