From Yugipedia
(Redirected from Great King of Terror)
Jump to: navigation, search

The☆Lugh (ザ☆ルーグ Za☆Rūgu), also commonly known as The Great King of Terror (恐怖の大王, Kyōfu no Daiō), is a character in the Yu-Gi-Oh! GO RUSH!! anime and the primary antagonist of the third story arc. A ruler from the Arctic Nebula, his ship emerges beyond the solar system and approaches the Earth. 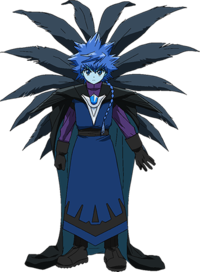 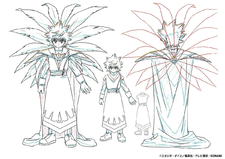 Lineart of The☆Lugh depicting him from different angles.

The☆Lugh resembles Lucidien "Luke" Kallister from Yu-Gi-Oh! SEVENS. He is a blue-skinned young man with blue skin and hair resembling Luke's, but the points are shaped like icicles rather than gear spokes. He wears regal and heavy winter clothing due to the cold climate of his ship: wrinkled purple underclothes with a high collar, a dark blue sleeveless surcoat patterned with his insignia in black at the bottom and bound at the waist with a black sash, heavy black gloves and boots, and a heavy black cape with a teal inner layer, attached to his shoulders by black pauldrons and fastened over the chest with a silver section in the shaped of a "U" and a "V" layered and a blue gem atop them. The cape also has several large black feathers arranged behind The☆Lugh and fastened at the small of his back with a diamond-shaped blue gem.

The☆Lugh uses an ice-themed Dragon Deck, heavily focused on Normal Monsters that are supported through the The☆ series of cards. His ace monster, "The☆Dragias", is a parody of "Multistrike Dragon Dragias"; therefore, The☆Lugh uses a combination of cards and effects to summon two copies of it to the field as a reference to the original Dragias's effect of attacking twice.