Greiger, known as Bommer (ボマー) in the Japanese version, is an opponent in Yu-Gi-Oh! World Championship video game series. This is a video game depiction of Greiger, a character from the Yu-Gi-Oh! 5D's anime.

The player Turbo Duels against Greiger in the Stadium as part of the Fortune Cup. He can be rematched in the Stadium's entrance after finishing the game. 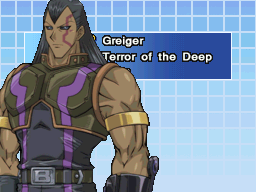 Greiger, in Reverse of Arcadia

Greiger appears exclusively as a Dark Signer in this game.

The player faces Greiger as the third of the Dark Signers. He forces the player into a Turbo Duel, and demands to be defeated only after his Earthbound Immortal, "Cachu Challhua", is summoned. Doing so will let the player continue with the storyline.

After finishing the game, the player can Turbo Duel against Greiger as the first opponent of the dark miasma duel gauntlet located in the B.A.D. area. 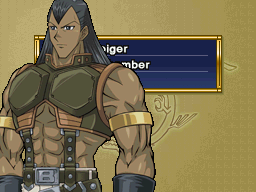 Greiger, in Over the Nexus

The player can Turbo Duel against Greiger in the Stadium's entrance after finishing the main storyline.