A Guard Robot is a type of Dueling Machine in Yu-Gi-Oh! 5D's.

Having been programmed by Primo, the Duel Robot can analyze an opponents strategies in its eyes and deal with them accordingly, and even determine the percentage that they would play a certain type of card.[2]

This Security robot is activated by Primo, as a measure to prevent Yusei Fudo from getting his stolen engine program back. Later, it was used as a method of keeping him inside until the countdown for the explosion of the warehouse they were in reached 0. Before he left, Primo programmed the robot with data from Yusei's previous Duels, so it could counter against Yusei's Dueling strategies.

While Yusei is questioning Lazar about where the program is, the robot appears before them. It then scans and identifies Yusei, and then proceeds to close down all of the exits. The security robot then claims that he must defeat it in a Duel, if they wish to proceed.

Yusei accepts, and as the Duels begins, he's quickly put into a tight spot, as the Guard Robot analyzes and counters every move he makes while continuously increasing the amount of counters on "Counter Force" which the Guard Robot was going to use to win the Duel. The Duel was leading in the robot's favor throughout until it caused its own demise by paying half its Life Points via "Solemn Judgment" to negate Yusei's "Double Cyclone" which ultimately led to its defeat as Yusei proceeded to activate "Panic Wave" to negate the effects of the Guard Robot's cards, allowing Yusei to Summon "Stardust Dragon" and defeat the robot by destroying "Lock Dragon". It was destroyed when the robotics factory was. 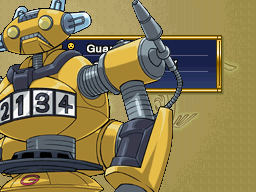 The Guard Robot, in Over the Nexus

The Guard Robot appears in Yu-Gi-Oh! 5D's World Championship 2011: Over the Nexus, having gone berserk after the main storyline's end and putting the Facility under lockdown. The player must defeat in order to duel the guards and inmates.

The Guard Robot uses a Lockdown Deck, focused on fueling "Counter Force" with an array of Counter Trap Cards while protecting itself from attacks with cards such as "Messenger of Peace" and "Level Limit - Area B".