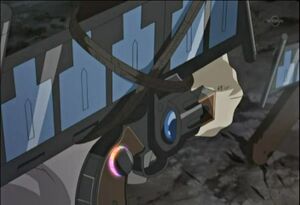 The Gunman's Disk is a revolver-themed Duel Disk that is used by the residents of Crash Town, inspired by gunslingers of the American Old West. It was never named in the anime, but it is referred to as the "Gunman's Disk" in the player customization menu of Yu-Gi-Oh! 5D's World Championship 2011: Over the Nexus.

Using this particular model, the residents of Crash Town perform the following quick draw-esque set-up method to determine who goes first: the first player to set up their Duel Disk and draw their starting hand the fastest gets the first turn.

In English anime dub, these Duel Disks are remodeled to look less violent.

Instead of arrows, the Monster Card Zones have bullet-shaped symbols on them.