Haiyama is a student at Domino High School, who pay people to do as he pleaded and would whip them if they failed to comply with his orders. 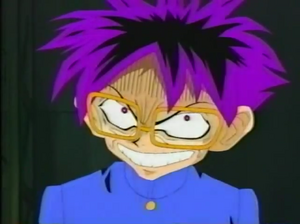 Haiyama manipulated Kujirada, while pretending that the opposite was going on. Haiyama was defeated by Dark Yugi in a Digital Pet battle. As his Digital Pet was defeated, he was seemingly beaten by his own pet.