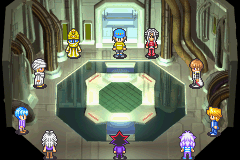 The Hall of Eternity 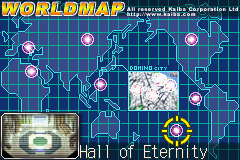 The location the Hall of Eternity on the world map

The Hall of Eternity, known as Between Eternity (永遠の間 Eien no Ma) in the Japanese version, is a location in Yu-Gi-Oh! Reshef of Destruction, where some of the strongest opponents in the game can be Dueled.

The Hall of Eternity is located on an island in the South Pacific Ocean. Its name references the fact that it is not fixed to a specific point in time, as it houses a number of Duelists who should not exist at that point in the game's story. e.g. Yami Bakura when Ryou Bakura does not have the Millennium Rod.

The player can travel to the Hall of Eternity after completion of the main story.

Each Duelist begins with an abnormally high amount of Life Points. Yami Marik only appears after the player has unlocked "The Winged Dragon of Ra (Phoenix Mode)".

All Duels take place in the Yami field.