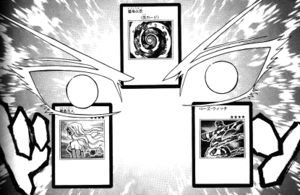 Hand Scan is a psychic ability Sherry LeBlanc possesses in the manga. Using it she is able to see cards in her opponent's hand by reading their mind,[1] similar to Pegasus' Mind Scan.

During her Turbo Duel with Akiza Izinski, Sherry used this ability with "Name Erasure" and "Mokusatsu" to constantly make Akiza discard her cards.[1] Akiza ultimately countered Sherry's Hand Scan with her own psychic ability: Foresee Draw. Akiza foresaw her draw and kept her eyes closed until her Main Phase; since Akiza herself didn't see the card she drew, Sherry weren't able to scan it.[2]