Hans is a member of Team Catastrophe. He has a criminal mark and is the only member of his team who wasn't shown in a Duel.

Hans is quite a psychotic man in nature as when he went to speak to Nicolas and Hermann after their victory over Team Unicorn, he kept hitting things with an iron rod even though there was no purpose. He also takes enjoyment in others pain such as laughing hysterically when people are hurt by his plans.

Before the WRGP, Hans lives in the slums with Nicolas and Hermann claiming that the unity of Satellite and New Domino City didn't affect their lives at all. One day, Hermann was riding his Duel Runner when Primo stood in his way causing him to dodge and crash which in turn caused Hans and Nicolas to question Primo's intentions. Primo then awarded them with a couple of Dark cards which would help them cause other Duel teams to crash which would win them the WRGP by default earning them titles of Duel kings which would lead them to a life of glory and fame. Agreeing to this, Hans along with his team mates agreed and formed Team Catastrophe to enter the World Racing Grand Prix.

Hans was first seen when Andre was Dueling Yusei Fudo along with his team mates which were all smiling at the Duel calling them weak due to them not understanding true power. He was then later seen when they beat Team Unicorn and was smiling smugly about the incident which surprised Team 5D's as both Andre and Jean were badly hurt and needed instant medical attention. After this, he along with his team mates wanted to destroy Team 5D's so that they only had 2 members to enter with. Since Hermann had already broken Crow's arm, they decided to go after Akiza Izinski whilst she was practicing for their upcoming match. They used the effect of "Hook the Hidden Knight" to lock Akiza's Duel Runner which caused her to crash and go into a small coma. They then cheered and drove off thinking that taking Jack Atlas and Yusei Fudo out with their cards of darkness would be easily done.

On the day of their match, to their surprise Crow Hogan attended and took part in the Duel, dodging the damage from the card of darkness which caused Hans and Nicolas to get angry. As Nicolas crashes due to his own card of darkness, Hans' team is disqualified and he does not get to duel against Team 5D's. 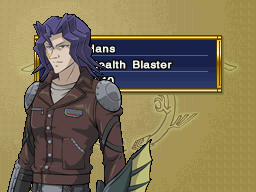 Hans, in Over the Nexus

Hans appears in Over the Nexus as part of Team Catastrophe. He is not faced during Team Catastrophe's match against the player's team due to Nicolas' self-disqualification, but the player can duel against him in the Mountain Pass after finishing the game.