"Harpie" (ハーピィ Hāpyi) is an archetype composed of WIND Dragon and Winged Beast monsters. Mai Valentine uses this archetype in the anime and manga.

"Sky Scout", originally known as "Harpie's Brother", is not a Harpie card because it does not have 「ハーピィ」 in its Japanese name. It was renamed to clarify this.

When "Harpies" were released (some of the first monsters released that would later become an official archetype), they didn't have much support. From Rise of Destiny onward, however, "Harpies" became more balanced and powerful with occasional support cards released. Structure Deck: Lord of the Storm has aided this archetype with cards such as "Hysteric Party" and "Harpie's Pet Baby Dragon", while also featuring a lot of other Harpie-related cards in it. Afterwards, "Harpie Queen" was released in Force of the Breaker, providing ways to search "Harpies' Hunting Ground".

With the release of Lord of the Tachyon Galaxy, Harpies get some tremendous boost, while also solidifies the deck's focus of maintaining advantage and Xyz Summoning. "Harpie Channeler" is essentially become the main card in all Harpie-based decks, as she can Special Summon another Harpie monster from the Deck while also assists Xyz Summoning of Rank 4 or 7, while "Hysteric Sign" helps searching either "Elegant Egotist" or any Harpie cards you may need, depending on how you use it. The Xyz Monster in this archetype, "Harpie's Pet Phantasmal Dragon" can protect your other Harpie monsters from attacks or targeting effects, along with direct-attacking ability as well.

Legendary Collection 4: Joey's World also provides more support for this archetype (while also reprinting important Harpie-related cards as well). "Harpie Dancer"'s effect can be utilized for reaping more benefits from "Harpies' Hunting Ground", or providing more swarming capabilities when coupled with "Divine Wind of Mist Valley". They also have their ultimate Spell Card, "Harpie Lady Phoenix Formation", which can decimate your opponent's field of monsters, but disallows you to Special Summoning monsters from your Deck, Graveyard and skipping your Battle Phase, making it a double-edged sword with hefty drawbacks.

In the anime, the "Harpies" are the signature cards of Mai Valentine. She often begins with one "Harpie" card and uses support cards to accessorize and multiply it. Joey Wheeler also used some "Harpie" cards as a reminder of his promise to save Mai from her Penalty Game.

A "Harpie Lady" also appears as a Duel Monster Spirit in Yu-Gi-Oh! GX. She battles Jesse Anderson and his "Crystal Beast Sapphire Pegasus". That same "Harpie Lady" later uses the effect of "Elegant Egotist" to multiply into 3, but they were defeated by "Sapphire Pegasus" and "Topaz Tiger".

Alexis Rhodes, Jasmine and Mindy dress up as the "Harpie Lady Sisters" in Yu-Gi-Oh! GX.

In Yu-Gi-Oh! 3D Bonds Beyond Time, at the site of Maximillion Pegasus's tournament, one of the spectators cosplays as a "Harpie Lady".

In Yu-Gi-Oh! The Falsebound Kingdom, the Harpie Ladies are given names, each based on those of three Harpie sisters from Greek mythology: 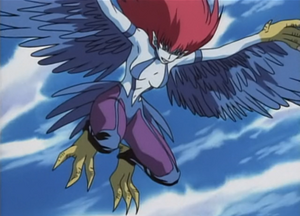 "Harpie Lady" in the Japanese version

Most "Harpies" in the international release of the game, including all language prints except Japanese, and in the anime have been edited to appear to wear bodysuits while in the Japanese versions they wear much more revealing clothing. "Cyber Harpie Lady" and "Harpie Lady Sisters" have had the spikes extruding from their armor removed due to the suggestiveness. However, some earlier printings of a few of the "Harpie" cards outside of Japan (specifically the original "Harpie Lady" and "Harpie Girl") were printed without being censored.

"Harpies" combine the ability to be rapidly summoned, to destroy the opponent's Spell and Trap Cards, increase each others attack points, enhancing their individual abilities, and to protect each other. They do not have the ability to destroy Spell and Trap cards innately, but their Field Spell Card, "Harpies' Hunting Ground" allows them to destroy one Spell or Trap Card when a "Harpie Lady" card is Summoned in any way. They can be Summoned from the Graveyard in large numbers through the effect of "Hysteric Party". Their support cards rapidly gains power ("Harpie's Pet Dragon") or utility ("Harpie's Pet Baby Dragon") depending on how many Harpie Lady cards you control. Properly played, "Harpies" can overwhelm the opponent in moments with high attack power and powerful effects, but they are not strong individually, so they are vulnerable to opponents who can overpower them, or destroy all of them at once.

To keep their onslaught running, they also utilize "Hysteric Sign" for searching more Harpie cards and maintain card advantages in their favor, while using "Harpies' Hunting Ground" and "Icarus Attack" as control measures to destroy any obstacles your opponent may utilize.

Link Monsters such as "Greatfly" help "Harpies" maintain their swarming ability and boost their ATK.

Despite the many powerful combos that "Harpies" are capable of, there are still weaknesses within this archetype that can be capitalized on. For instance, most "Harpie" monsters, except "Cyber Harpie Lady", "Harpie Queen", "Harpie's Pet Dragon" and "Harpie's Pet Phantasmal Dragon" are generally low in original ATK, making them unsuitable in battle against most high-ATK monsters.

Since this archetype have emphasis on rapid Special Summoning, anti-Special Summoning cards like "Vanity's Emptiness" and "Fossil Dyna Pachycephalo" can be hazardous against this Deck. "El Shaddoll Winda" can also pose problems as well (albeit "Hysteric Party" can somewhat bypass this).

Effect negations such as "Effect Veiler" or "Breakthrough Skill", or disruption cards like "Book of Moon" and "Solemn Warning" is very effective against them during early game stage. Since they mostly focused on Xyz Summons, "Flying "C"" can shut down the Deck's aggressive stance, and "Thunder King Rai-Oh" can blocks the effects of "Hysteric Sign", slowing them down.