For the anime version of this character, see Hart Tenjo

Haruto Tenjo appears as a young boy with blue hair and golden eyes. He is outfitted in dark blueish clothing and equal height as Vetrix from the anime. After losing his soul in the Astral World, he also gained small red marks under his eyes.

According to Mr. Heartland, Haruto has a big hidden power, which allows him to communicate with the spirits of the Astral World.[1] It seems that not only that, but he can also create powerful attacks, like a huge fireball, and send them directly to it through a portal.[2] Haruto seems to be able to emanate energy as well, as seen when he lost control watching Kaito being hurt by Hishakaku's attack, which caused him to create a huge sphere of energy, crashing the windows of all buildings nearby.[3] 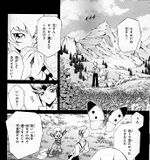 Haruto used to be a very kind boy, who would release butterflies after capturing them because "their life is too short to be spent in a cage". After losing his soul in the Astral World, he seems to be indifferent most of time, always keeping his same emotionless expression. He also seemed to develop a sadistic love for hearing screams, making him laugh psychopathically while Dr. Faker made him attack the Astral World. However, he still seems to recognize Kaito as his big brother and have some love for him, since seeing Kaito being hurt in the Duel against Hishakaku made Haruto lose control.

In the past, Haruto lived with his brother Kaito Tenjo in a small, wooden villa where they would play all day. They used to hunt butterflies together, but Haruto always freed them after hunting them. Kaito used to praise him for being that gentle.

One day, Mr. Heartland took Haruto away by force following Dr. Faker's orders and saying that he has a special power within him. Kaito tried to rescue Haruto, but Mr. Heartland fled by car.[4]

Some time later, when he goes to Mr. Heartland's place, Haruto initially doesn't recognize him. Kaito hugs him and asks Mr. Heartland what he did with him, who explains that Haruto has the power to communicate with the spirits of the Astral World, and that they need him to destroy it, or our world won't be saved. Kaito tells him to return Haruto back to normal, and Mr. Heartlands says that his soul had probably already left, but that there is a way to heal him, which is to become a Number Hunter and collect all the "Numbers" - and at that time, Haruto catches a butterfly with his hands and crushes it. Shocked, Kaito accepts Mr. Heartland's order. From that day on, using Heartland Tower as a base, Kaito found and defeated the holders of the "Numbers", under Dr. Faker's command.[1] 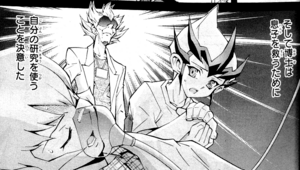 Luna explained to Yuma Tsukumo that Haruto and Kaito were Dr. Faker's sons, and one day, Haruto developed an incurable disease. Dr. Faker used his researches trying to cure Haruto with the power of the Astral World; Instead, Haruto gained his dimension-warping powers and his soul became lost in the Astral World. 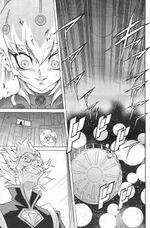 Haruto as he attacks the Astral World.

In Heartland City's garbage processing plant, Haruto stands on a floating platform. He says that he wishes to hear more screams. Garbage swirls around him and coalesces into a fireball, which hits the Astral World through a portal. Hearing the screams coming from there, Haruto maliciously smiles. Dr. Faker smiles as he watches on. At Heartland Tower, Mr. Heartland tells Kaito that he'll be sure to convey his passionate heart to Dr. Faker. He tells Kaito he should go see Haruto, as it's been a while, and it will surely boost Kaito's will as well. After Kaito leaves, Heartland turns around and addresses Dr. Faker through a circular monitor. He tells Faker that everything is progressing well. Faker responds that that's fine and that the life of Kaito's younger brother is on the line for him. Faker states that Kaito has given up his humanity to protect Haruto, just as Faker has given up his to protect the city. Faker says that he knew a messenger would be sent from the Astral World and that he will crush it thoroughly, sending its remains back to their world. He claims it's the only way to protect the planet. Heartland says he's understood.

In another room of the tower, Kaito visits Haruto, who stares out the window at people below. He asks why they're laughing - he doesn't want laughter, only more screams. Haruto asks if he's strange and Kaito tells him he's just dreaming - it's a bad dream. He vows to wake him from that dream, no matter what.[2]

Later, when Kaito Dueled Yuma Tsukumo, at the instant when he would win, Orbital 7 told Kaito that Haruto was badly injured, making Kaito cancel the Duel and flee.[1] 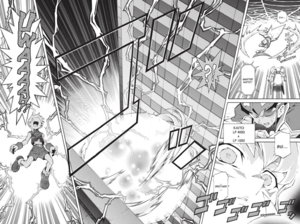 At night after confronting Kyoji Yagumo along with others, Kaito picked up Haruto and left Heartland Tower, blowing it up in the process. He told Haruto that Kaito was taking him somewhere safe so he wouldn't be caught up in the chaos of the war, but Heartland Tower was also not a safe place for them anymore. However, Kyoji set up spider webs to ambush Kaito, making him Duel one of his subordinates as Kyoji held Haruto hostage.[5] During the Duel, Kyoji tried to anger Kaito, leaving Haruto suspended over a building with a spider thread; however, watching his big brother get hurt in the Duel made Haruto lose control, creating a huge sphere of energy. Kyoji then flies away with Haruto, saying that he pushed him too far.[3]

Afterwards, Kyoji kept Haruto lying in a bed. Looking at him, Kyoji remembered a boy who seems to be his young brother. Later that day, Kyoji lures Kaito to Duel him, saying that he would help him cure Haruto if he won. However, that was a trap, and Kyoji made Kaito Duel his own brother instead.[6] 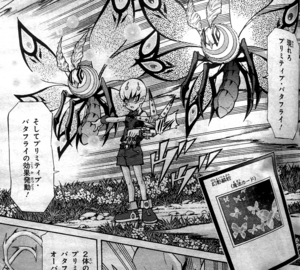 Haruto Duels Kaito, not recognizing him.

During the Duel, Kaito tried to talk to Haruto, but he wouldn't listen. Kaito asked Kyoji what he had done to Haruto, with Kyoji saying that he would give him a hint: Haruto could only see Kaito as an enemy right then, and commented that was a pity. He explained that the "empty shell" Haruto wasn't even able to recognize his only blood relative, but that if Kaito became his subordinate, he would be able to meet the true Haruto again. Kaito declined, asking who would be crazy to help Kyoji, with Kyoji telling him to fight then, as much as he wanted to. The Duel then went on, with Haruto acting as if he had "burnt" all the memories he had with Kaito. Kyoji explained to Kaito that it seemed all of Haruto's beautiful memories had turned ugly. Kaito manages to pull a victorious combo with "Galaxy Shot"; Kyoji praises Kaito, noticing that the combo would make him win the Duel, and told him to go on and blow off him and Haruto with his attack; however, he asked Kaito if he knew what would happen if a "Number" holder lost on a Duel of "Numbers", and explained that Haruto would vanish from this world along with him. Kaito then fell on his knees saying that he couldn't hurt Haruto, and forfeiting the Duel.[7] 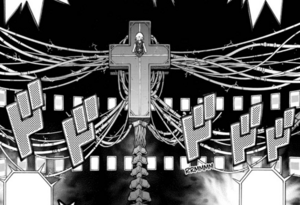 Later, Kyoji set a double Duel between Yuma and Kaito, and between Shark and himself in the Heartland New Tower. Noticing that Kaito was obeying Kyoji because of Haruto, Yuma asked his friends to look for Haruto, with Luna joining them afterwards.[8] They managed to find Haruto stuck in a huge cross inside the tower's monument. Luna asked Yuma, Kaito and Shark to stop the Duels, noticing that the device was collecting "Numbers" energy with the Duels, and that if it activated, a door to another world would open. However, Kyoji revealed that the device was keeping Haruto alive; if one stopped it, Haruto would die. [9]

Haruto uses an Insect Deck, primarily focused on Xyz Summoning his "Number", "Number 28: Titantic Moth" easily through cards such as "Primitive Butterfly" and "Phantom Scales". He also supports it through cards like "Memory Oblivion".