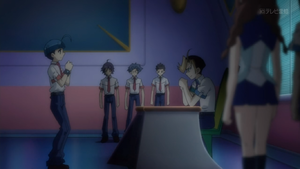 At the end of the series, Rio Kastle was appointed as the new disciplinarian, as she detained Yuma for being late for class.[2]