From Yugipedia
Jump to: navigation, search
For the location in the Xyz Dimension, see Heartland Tower (ARC-V).

Heartland Tower is a huge tower in Heartland in the Yu-Gi-Oh! ZEXAL series, which serves as the residence of Dr. Faker and his family. It features a giant heart on the top, which symbolizes the city's name.

Below this tower there was a space rift created by Hart Tenjo, which leads to the Astral World. It was being used to throw all the trash collected by Litterbots into the Astral World. The top of the tower was also Hart Tenjo's bedroom decorated up with lots of colorful stars like a child's playroom with a view over the city, which was accessible by an elevator.[1][2]

The heart on top of the tower includes a system to defend against aerial attacks; concealed beneath the tiles of the heart are multiple laser cannons.[3] 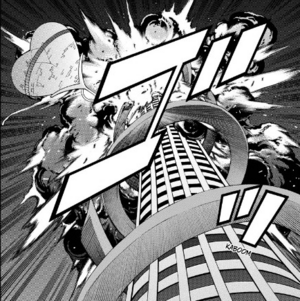 In the manga, once Kyoji Yagumo declared the "Numbers War", Kaito fled from the tower with Haruto, blowing it up in the process.[6]