From Yugipedia
Jump to: navigation, search
For other uses, see Hikari (disambiguation).

Hikari is one of the children in Crow's care in Yu-Gi-Oh! 5D's. Her name comes from the Japanese word hikari (), meaning light.

Hikari lived in Satellite, with a number of other young children, including Taiga, Kokoro, Ginga and Daichi. They were often visited by Crow, who gave them Duel Monsters cards and advised them not to get in trouble with Sector Security.[1]

She listened to the Daedalus Bridge legend off Crow when Yusei and his friends were visiting.[2] 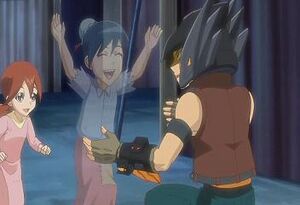 Hikari was absorbed by the black fog when it released on Satellite. This was used to Summon the Earthbound Immortals. Crow managed to survive the black mist and for a brief moment though the children did too. He saw some of them including Hikari run towards him, before realizing that it was just his imagination.[3]

Hikari was released after the Earthbound Immortal, she had been sacrificed to Summon, was defeated.

She lived in Martha's care afterwards.[4]

Hikari boarded the bus with the other people at Martha's house as New Domino was evacuated while the Ark Cradle descended.[5]