The Hologram Man (ホログラムの Horoguramu no Otoko) is a character in the Yu-Gi-Oh! SEVENS anime. His true nature is unknown, but he is an urban legend, said to be a holographic Duelist. He Duels Yuga Ohdo to determine whether he is worthy to be the King of Duels. 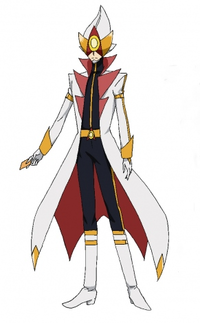 The Hologram Man appears as a tall pale-skinned man dressed in a white trenchcoat with gold markings and a red interior over a black jumpsuit with a gold belt and gold zipper. He also wears white knee-high boots and gloves, both with gold markings. The Hologram Man's face is concealed behind a mask that resembles Kite Tenjo's hairstyle, with a teardrop-shaped white point, and a triple-pronged attachment at the front with a red center prong and gold outer prongs.

Despite being supposedly merely a hologram, the Hologram Man is shown to be capable of emoting to a degree. He is intrigued by Yuga Ohdo's Rush Dueling, believing it to be a dynamic form of Dueling and adapts to the format quickly.[2]

The Hologram Man's origin is unknown; he is an urban legend said to test the future Duel King. Rook found his chamber a week before the series and Dueled and defeated him several times, but each time a timer ran out and he received a penalty, eventually having his account locked. Rook brought Yuga Ohdo to the Hologram Man's chamber, suggesting that Yuga's Rush Dueling rules could be the new path needed to defeat the Hologram Man. With only six minutes and sixty-six seconds after a Goha Corporation Drone discovered Yuga and his friends, Yuga decided to use Real-Time Duel Programming to install his new rules by Rush Dueling the Hologram Man. The Hologram Man accepted Yuga's challenge, and he was intrigued by the repeated Summons of Rush Dueling, praising it as dynamic. The Hologram Man swiftly Tribute Summoned "Blue-Eyes White Dragon" on his first turn, destroyed Yuga's monsters, and reduced him to 1000 LP. Yuga was able to make a comeback on the next turn due to the rules of Rush Dueling allowing him to draw until he had five cards in his hand, Tribute Summoning his own ace monster, "Sevens Road Magician" and increasing its ATK to 7000, destroying "Blue-Eyes" and defeating the Hologram Man. Following the Duel, the Hologram Man's voice congratulated Yuga, telling him that a new road would open.[2] The Hologram Man reappeared by the door, telling the kids that the one who would become the King of Duels would follow the new road, though the door he had made appear was just a hologram. Before vanishing, the Hologram Man told them that though the door had been opened, they would have to find it themselves.[3]

The Hologram Man uses a Dragon Deck, composed of Dragon Normal Monsters. His strategy focuses on straightforward beatdown tactics, combining the high-Level and high-ATK "Blue-Eyes White Dragon" with "Traditional Burst Breath" to destroy his opponent's monsters. All of his monsters are imported from the TCG/OCG, rather than being unique to Yu-Gi-Oh! Rush Duel.