Horseytail is a character version of the card "Horseytail" in Yu-Gi-Oh! 5D's World Championship 2009: Stardust Accelerator.

It appears as a Tag Duel opponent, partnered with Gokipon as part of the Tag Team Jungle Alliance. They are unlocked as opponents after listening to the Tag Duel explanation in Story Mode. 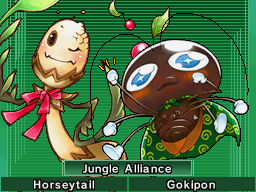