From Yugipedia
Jump to: navigation, search
For other versions of this character, see Hunter Pace (disambiguation).

Hunter Pace, known as Mukuro Enjo in the Japanese version, is a character in Yu-Gi-Oh! 5D's. Hunter dresses in biker gear and adopts a similar attitude. In the dub, Hunter has a Texan accent and usually pleads for mercy when he is about to lose. 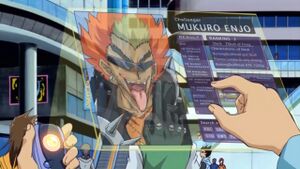 Hunter was once the Duel Monsters world champion. He defeated opponents including Esper Rouba, Ghost Takarazuka, Maizuru Kujyaku, Insector Hakata and Dinosaur Hakozaki, but lost to Pirates Keith and Tatsuya Jyouchi. (These names are all parodies of characters from the original Yu-Gi-Oh! series. Their mention was excluded from the dub).[4] Similarly, Hunter himself also seems to be a reference to Bandit Keith. Both were former champions that attempted several times to reclaim their respective titles using underhanded tactics in order to Duel the current champion. Neither succeeded in their endeavor.

Hunter faced Jack as the challenger in an attempt to take Jack's title of King, but was unsuccessful. After the Turbo Duel, the MC commented that Hunter had been doing well at the start of the Duel, but Jack snatched the microphone and claimed to have not been playing at full power the whole way through, in order to put on a better show.[4]

Hunter became bent on overthrowing Jack and got another chance to face him in a title Duel. On Hunter's first turn, he lowered Jack's Life Points to 1000 and planned to win next turn. However, Jack mocked Hunter's Dueling, calling it luck. Jack turned the Duel around and won on his next turn.[5]

When the Fortune Cup was held, Hunter saw another chance to face Jack. He broke into the stadium and disguised himself as a Security officer. He eavesdropped on Lazar and Shira, hearing that Shira will be facing Yusei Fudo, who unbeknownst to the public defeated Jack. Afterwards Hunter mugged Shira and stole his clothes to disguise as him and enter the tournament.[6]

He masquerades as Shira and faces Yusei, quickly revealing his true identity. Rex Goodwin thinks that this could be interesting and allows the Duel to continue. Although Hunter lost the Duel, he was happy with the results, considering it to be the best Duel he has ever had.[6]

An information screen on Z-one's computer in his future listed Hunter as a teammate of Yusei and Akiza Izinski, and the three won the Pegasus J. Crawford Cup Trinidad Riding Duel Grand Prix together.[7] During Yusei's Duel against Z-one Hunter was seen cheering him on.[8] 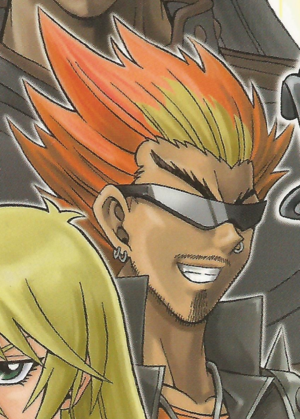 Hunter Pace, known as Enjo Mukuro (炎城 ムクロ, Enjō Mukuro) in the Japanese version is a character from the Yu-Gi-Oh! 5D's manga. He was a contestant in the D1 Grand Prix but was eliminated in the second round.[9]

Hunter uses a Skull of Fire Deck[1] focusing on the "Burning Skull" series. His Deck later comes to be known as the Super Revenge Deck[2] primarily focused on his "Skull Flame" and recycling his "Burning Skull Heads" to inflict a large amount of effect damage. During the Fortune Cup, he uses a Speed Acceleration Deck,[3] which focuses on a strategy devoted more toward accumulating a large amount of Speed Counters through cards such as "Acceleration Zone" and "Doom Acceleraetor" which gives him early access to more powerful Speed Spell Cards such as "Speed Spell - Accelerate Draw" and "Speed Spell - End of the Storm". He also uses "Speed King Skull Flame". Regardless of what name he uses for the Deck, it always focuses on the "Burning Skull" series.