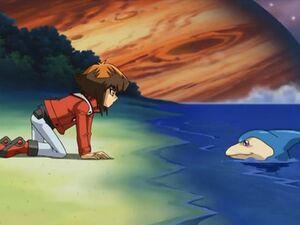 Io, with Jupiter visible in the background

Io is a moon of Jupiter, which appears in the Yu-Gi-Oh! GX anime. In the English dub, the name and whereabouts of the location are not mentioned.

Unlike in the real-world, Io is inhabited by dolphins and is a part of Neo Space.

KaibaCorp conducted a project where they sent a time capsule into space and held a competition where children were to design Duel Monsters cards to be placed inside the capsule. Cards designed by Jaden Yuki were selected as winners and placed in the capsule, which was put in a satellite, sent into space. The satellite went on to crash on Io.

Many years after the competition, while Jaden was on a boat off Duel Academy a shooting star collided with the water near him, which caused him to be transported to Io. Although Jaden recognized the planet Jupiter in the distance, he speculated that he could be in the afterlife. He was then approached by Aquos, who told him where he really was and that the Gentle Darkness or the universe was being threatened by the Light of Destruction. Aquos said that had been searching for someone with gentle darkness capable of fighting off that light, found Jaden and brought him to Io. Jaden did not believe he was the right person, but they were then interrupted by the arrival of the Alien of Light.

Aquos insisted Jaden must Duel the Alien of Light, but Jaden said he could not as he was incapable of seeing his cards, since losing to Aster Phoenix. However Aquos directed him to the KaibaCorp satellite, where he retrieved a Deck from the time capsule, including cards based on his designs. Jaden defeated the Alien of Light in a Duel and was transported back to Duel Academy.