Ishiki makes several cameos in the anime as an unnamed character. He watched the duel between Jaden Yuki and Dimitri with America Uchimura, was one of the Ra Yellow students beaten by Chazz Princeton as a member of the Society of Light, and was one of many students who were transported in second alternate dimension and became a Duel Ghoul. 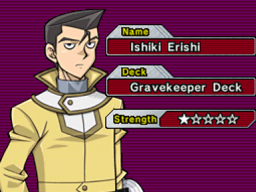 Ishiki appears as an opponent who can be faced from the beginning of the game. He can be found around the Beach and near the Yellow and Blue Dorms, and he is easier to find during the weekends.

Ishiki can give the player 1 copy of any of the following cards each time he is defeated.

Subject: Tell Me Your Tricks

I heard good things about you. I want to test out my skills, so let's duel soon. But somewhere where no one is around. It's embarassing if I lose to a slacker.

Give me some tips

I'm having a pretty hard time improving my skills these days. I keep hearing you're making a name for yourself, and that you're involved in all sorts of things! Give me some dueling tips next time while nobody is around.

What did you study to learn those dueling techniques? C'mon, whisper it in my ear so no one else can know.

Teach me in secret

Just what, and how, did you study to learn those dueling techniques!? Teach me about that in secret one of these days.