During the Fortune Cup finale, Jack encountered the the player and Dueled him for Yusei Fudo's "Stardust Dragon" card. Jack expressed surprise at the fact that it was the player facing him, and not Yusei and offered to return the card to the player if they defeat him. After losing, Jack was shocked, but returned "Stardust Dragon" as promised. He then told the player that the next time they faced him, he would be victorious, before leaving the stadium. Jack can later be found outside of the Fortune Circuit building. 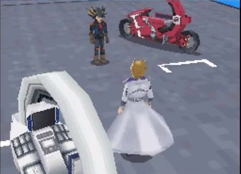 Jack is defeated by Yusei.

Jack is first seen by the player during his Duel against Yusei Fudo in the Fortune Cup. During the Duel, the Crimson Dragon appeared just before Jack lost. The Duel caused the player to have a flashback of Jack and Yusei in Satellite, who seemed to know the player.

Blast from the Past - Old Memories, a Team's Bond[edit]

During one of the player's flashbacks, they remembered that they were part of The Enforcers with Jack, Yusei, Crow and Kalin. Upon arriving to Team Black 'n' Blue's hideout, Kalin informed that player that Jack and Yusei were already there, looking for Team Black 'n' Blue's members in the basement. After the player defeated Hiroyuki, Jack and Crow arrived. Crow mocked their leader for being a child, but Jack scolded him, saying that age and skill have nothing to do with each other. The Enforcers later went back to their base to discuss their victory. Jack asked Kalin if he was alright after being captured. After the meeting, Jack suggested they call it a day.

The next day, The Enforcer's went to the hideout of Team Dirty Works. Angered by their members attempting to kidnap Itsuki the day before, Crow and Kalin rushed in before Jack arrived. Upon arriving, Jack and Yusei questioned the player on the whereabouts of Kalin and Crow and entered after the player told them, with Jack not wanting them to hog all of the fun. He also agreed with Yusei that they could possibly fall into one of Team Dirty Work's traps due to their anger. After the player defeated Ida, the leader of Team Dirty Works, The Enforcers returned to their hideout to discuss their victory. Jack questioned whether or not they would be able to conquer all of Satellite. Kalin then called it a day as their last turf battle was the next day. He also advised everyone to tweak their Decks as it would be difficult. 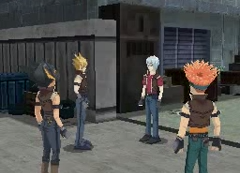 The Enforcers get ready for their last turf battle.

The Enforcers met up outside the hideout of Team. Crow and Kalin rushed in, while Jack, Yusei and the player slowly followed. After the player entered the base, they interrupted four of the gang members planning on Dueling Jack, who then split up into two pairs to take on both of them. The player and Jack easily defeat the Duelists who then run off. After the player defeated Gushizawa, the leader of Team, The Enforcers returned to their hideout to celebrate. A few days later, Jack questioned whether or not he was satisfied with the result of the Duels before challenging the player to a Duel. After defeating him, Jack rewards the player with a "Different Dimension Capsule" card. Later on, the player witnessed Kalin assaulting Hiroyuki outside of the base. Hearing this, Jack rushed out with the others to stop him and was shocked at seeing Kalin cornering the child on the edge of a chasm. After witnessing Kalin's behaviour, Jack, Crow and the player left The Enforcers. Kalin later attacked Sector Security, causing Jack to unite with the remaining Enforcers once again to save him. They return to the abandoned building that Team Black 'n' Blue used for their hideout to find Kalin. Jack warned the player that if any Sector Security officers spotted them, they would be kicked out. After the player found Kalin, they returned to the base, with Yusei bringing Jack and Crow shortly after. Jack warned them that there were a large amount of Security officers patrolling Satellite and suggested laying low for a while until it calmed down. Sector Security shortly arrived outside of the hideout, surprising Jack who stated that there was no way out of it. When Yusei suggested a method of escaping, Jack questioned what it was, but Yusei wouldn't tell him and only asked him to trust in him. He also stated that even if they escape, Sector Security will follow, putting them in an even larger mess than they already were in. Yusei suggested that Jack take Kalin and Crow to the abandoned bowling alley to escape while he and the player deal with Sector Security. During their escape, Sector Security caught Jack and although he attempted to fight back, he was sent home. 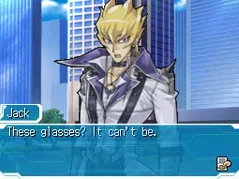 After the Dark Signers assault the Arcadia Movement, Jack approached the building and was shocked to find Carly's glasses lying on the ground. Upon finding them, Jack frantically attempted to find Carly, even to the extent that he almost died by being crushed by falling debris. Mina warned Jack that it was too dangerous and that they must leave before Sector Security arrived. Jack hesitantly left, hoping Carly was safe. Jack and Mina later went to Blister's apartment to find Yusei and Akiza who were on their way to see Rex Goodwin. Jack questioned whether they were going to fall for Goodwin's bait before expressing shock at seeing the player was live and well after disappearing in Satellite. They all then left to meet with Goodwin at his Goodwin's mansion to discuss the Dark Signers.

Upon arriving at Goodwin's mansion, Jack immediately questioned Goodwin's real intention for gathering him and the other Signers. During the meeting, Goodwin informed them that everything in their lives was destiny, caused by the Crimson Dragon which Jack ignored, stating that they all chose their own fates. Leo brought up that there were supposed to be five Signers, Jack agreed, asking Goodwin why there were only four of them there. Goodwin then informed them of the Dark Signer's and their intention of reviving the King of the Netherworld to bring darkness to the world, which Jack correctly guessed was the reason as to why they were gathered - to stop it from happening. Jack later agreed to fight the Dark Signers alongside the other Signers, but only because he cared for too many things in Satellite to allow it to be destroyed. He, the player and the other Signers were then taken back to Satellite by Mina and Tetsu Trudge. 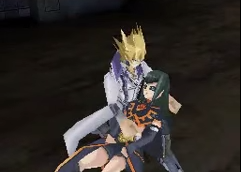 Jack holds a dying Carly in his arms.

After arriving, Jack was approached by Carly who revealed she was a Dark Signer to him. He later met up with the player and Yusei who informed him that Kalin was still alive, shocking him. Yusei then questioned who the Dark Signer was that Jack met, to which he lied, stating it was someone he had never met before. He then abruptly left, with Yusei following shortly after. Later on, after the player defeated Carly, Jack managed to ride over the geoglyph on his Duel Runner and asked to take the player's place, to which they agreed. Carly, overtaken by darkness threatened Jack before they began to Duel. Jack later managed to defeat Carly and held her in his arms where she wished she would save the world and declared her love for him before dying. He then silently sealed the tower with his "Red Dragon Archfiend". Jack later arrived at Goodwin's mansion alongside Leo and Luna where Akiza informed them of Goodwin's plot. When Goodwin replaced his arm with that of his brother with the Signer mark, it caused Jack's and other Signer's mark to disappear, surprising him. During the epilogue, both Mina and Carly seek Jack's affection to which he responds by turning his back to them and walking away. Jack can later be found outside of the Fortune Circuit.

Going Home - Memories Long Past and a Hand of Hope[edit]

Changes - Preparing for the Tournament and a Looming Shadow[edit]

To the Future - State of the WRGP and the World[edit]

The following cards can be obtained after defeating Jack in Ground Duels.

The following cards can be obtained after defeating Jack in Turbo Duels.

The following cards can be obtained after defeating Jack in Single Ground Duels and Single Turbo Duels.

The following cards can be obtained after defeating Jack in Tag Ground Duels and Tag Turbo Duels. 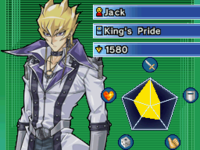