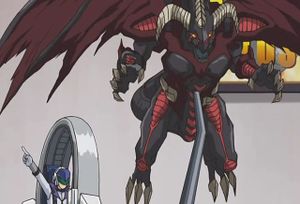 The Jack Atlas figure was a toy released while Jack Atlas was extremely popular as King in New Domino City.[1]

It comes with a model of his Duel Runner; the Phoenix Whirlwind and his ace card; "Red Dragon Archfiend".[1]

Leo had a collection of Jack Atlas merchandise, which he called his King memorabilia. Yusei saw them shortly after meeting Leo for the first time. Leo asked if Yusei was a fan of the King too, but Yusei said that he wasn't.[1]