Jagger Princeton, known as Shoji Manjome「 」(Manjōme Shōji) in the Japanese version, is one of Chazz's two older brothers.

Jagger is at the top of the financial world, while his brother Slade is at the top of the political world. They wanted Chazz to be the top of the Dueling world, which would give their family a foothold in the three major industries of the world at that point.[1] To this end, he and Slade sent television cameras to broadcast Chazz's Duel against Jaden Yuki live. To ensure Chazz's victory, they gave him a Deck of Dragon-Types, which they described as some of the rarest cards in the world. Despite this, Chazz opted to use the "Armed Dragon" cards he obtained from Chancellor Foster of North Academy.[2] After Chazz's loss, they berated him and claimed that they were disowning him.[3]

Months later, he and Slade made a deal with Duel Academy's owner, Seto Kaiba. If Slade was able to defeat one of Duel Academy's students, they'd be allowed to buy the academy from him and do whatever they wished with it. Slade set several conditions: the opponent was to be Chazz, who would not be permitted to include any monsters in his Deck with more than 500 ATK. Slade, on the other hand, would use the Deck they had previously offered to Chazz, containing the rare Dragon cards. Kaiba accepted all these conditions. Despite this immense advantage, Chazz still defeated Slade with help from the "Ojamas" and "Chaos Necromancer". After the Duel, In the Japanese version, Jagger said that they would get their revenge, but Slade told him to stop, and instead stated that Chazz had truly grown up more than they thought he did, showing a sign of respect for Chazz. In the dub, Slade was mocked by Jagger for losing, with Slade stating that it was only one Duel, which Jagger pointed out that one Duel made Chazz look like a hero, and a major headache for them.

Kaiba got word of Slade's defeat. In the Japanese version, he tells one of his workers that he didn't need to be told that Chazz had won. Kaiba believed that any student at his academy should be able to win a Duel under those conditions. In the dub, Kaiba stated that Slade and Jagger have a long way to go if they want world domination.[4]

When the card spirits are drained by the Sacred Beasts, he and Slade watch as their briefcase of Dragon cards are drained, with their pictures disappearing. They seemed relieved at their return later, though Jagger dryly remarks in the English dub, "Too bad we can't dock their pay for time missed."[5]

Despite his treatment of Chazz, the latter later expressed a desire to compete in the Pro League in order to pay him and Slade back for the money they used to send him to Duel Academy.[6] 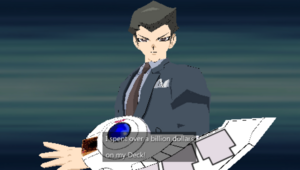 Jagger appears in the first three Tag Force games as an opponent and possible partner.

It is unknown if Jagger has a Deck in the anime, but he is seen with a briefcase containing the following cards during episode 49.