From Yugipedia
Jump to: navigation, search
For other versions of this character, see Jasmine (disambiguation).

Jasmine, known in Japan as Junko Makurada is an Obelisk Blue student, who is friends with Mindy and Alexis Rhodes. 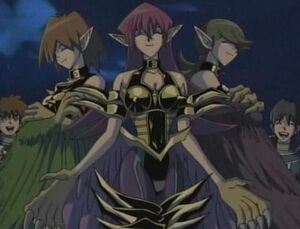 Jasmine is seen most of the time hanging around with Alexis and Mindy, cheering the former on during her Duels.

Early on in the first season, while searching for Chazz Princeton, Jasmine is kidnapped by an experimental chimpanzee, Wheeler, and taken hostage until Jaden Yuki won the Duel for her freedom.

In the second season, during the Genex Tournament, she and Mindy were only seen Dueling once.

Jasmine and Mindy are two of the few Obelisk Blue students who did not join the Society of Light.

In the third year, she got transported into the alternate dimension with everyone else, and in the fourth, she lost during her first Duel in the Pair Duel Tournament. She was one of the last students at Duel Academy during the Trueman siege but lost along with Mindy, going to the World of Darkness. She was revived when Jaden defeated Nightshroud.

Mindy and Jasmine are implied to share many crushes in the anime. Their eyes turn into hearts whenever an attractive male walks by, as seen with Harrington Rosewood, Atticus Rhodes, Yugi Muto, and Aster Phoenix. However, she seems to be a little more sensible than Mindy, as, despite initial infatuation with Harrington, she agreed with Syrus Truesdale about his somewhat boastful personality and sports clichés being repulsive as he bragged about himself to Alexis.

It is possible her name is a reference to the Japanese singer and actress Junko Sakurada from the 1970s.

The only shown card in Jasmine's Deck is "Mermaid Knight".