Jean can always be found in the Daimon Area, by Bootleg's entrance.

Jean is partnered with Tail, and they can be faced in Single Duels and Tag Duels.

Defeating Jean 10 times in Single Duels allows the player to choose him as a partner in World Championship Mode.

Jean is now only available as a Single Duel opponent, and the player cannot partner with him. 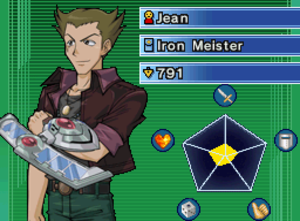