Jen, known as Sei (セイ Sei) in the Japanese version, is a recurring character from Yu-Gi-Oh! ZEXAL and is often seen hanging around with Tori Meadows and Summer.

After Flip defeated the Candy shopkeeper, he walked past Jen and Tori who were eating candy. Flip somehow turned the candy around in their hands whilst walking past, shocking Jen in the process.[2] 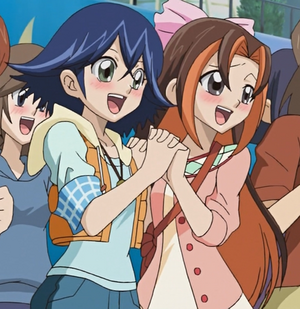 During Yuma Tsukumo's Duel with Striker, a hologram of Jen and Summer appeared beside Tori via the effect of the "Stadium of Dreams" Field Spell Card. They later disappeared after Yuma defeated Striker.[3]

On the third morning of the World Duel Carnival, Jen was watching Nelson Andrews' Duel with Nistro. When ever Nelson was in trouble, she screamed, but was overjoyed when he came out on top. However, she was ultimately shocked when Nelson lost. When he left the area, she followed with joy in her eyes alongside the rest of his fan girls.[1]

She, along with Summer, is also a boy crazy fan of Shark. When having to decide if she favors Shark or Quattro more, she sides with the latter. She also cheered for Yuma when he showed his and Astral's ZEXAL during the Duel against Vetrix.[4]

When she, Summer and Tori saw Caswell and the Disciplinary School squad, they began to scream when he threw cards at them and told them that their skirts are against the school's dress code. They threw their shoes at him, while saying that the skirts are part of the school's uniform. (in the dub, Caswell told them that gossiping was not allowed; Jen and her friends still threw their shoes at him, regardless)[5] During the Heartland Academy Fun Fair, Jen dressed up as "Lyna the Light Charmer". When Anna wanted to enter the Couples Duel tournament, Jen and Summer informed her that only students at the school could participate.[6]

Summer and Jen in Heartland Tower

Jen was among the survivors of Heartland who did not pick up a "Fake Number" and get sacrificed to Barian World.[7]