From Yugipedia
Jump to: navigation, search
For other versions of this character, see Jesse Anderson (disambiguation).

Jesse Anderson, spelled Jesse Andersen in some video games and called Johann Andersen[3][4] or Johan Andersen in the Japanese version, is a transfer student hailing from North Academy who enters Duel Academy in the third year. Jesse is Scandinavian in the Japanese version while he seems to be from the Southern United States in the English version. Sometimes, people call him 'Jess' as a nickname. Jesse is kind, thoughtful, and sometimes shy.

Excitable and energetic much like Jaden (similarities between him and Jaden are noted in both versions, from their personalities to their ability to see Duel Spirits), he serves as one of Jaden's allies. Although a close friend, his disappearance serves a catalyst for Jaden's descent into darkness as The Supreme King of the alternate dimension. Jesse is later possessed by the spirit of Yubel, Jaden's favorite card in childhood, using him and his "Crystal Beasts" as mediators to act through. 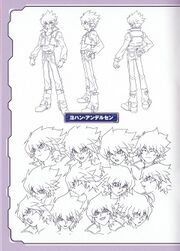 Jesse's design incorporates multiple layers of clothing and a wide range of expressions. Depicted here is the Duelist in full regalia from the front, side, and rear alongside views of his head from different angles.

Jesse's usual outfit consists of a blue above-waist-length jacket with dark blue outlines, a lavender shirt with frilled cuffs at the wrists of his sleeves, and black pants which are held up with a white belt. His teal hair juts in backward and down directions, and his eyes are kind and his chin prominent. He carries an Academy-issued Duel Disk on his left wrist. Jesse is well-built, as seen when he is possessed by Yubel.

While possessed by Yubel, Jesse's green eyes become Yubel's angry orange and are surrounded by shadows. He wears a sleeveless dark purple trench coat strapped together with belts at the front and with studs running down the sides, a black tank top and pants, and purple boots. Purple bands run around his thighs, and black bands around his biceps, while his forearms are clad in black arm warmers. His belt contains twin Deck cases that are operated by levers, and he carries the exclusive Rainbow Duel Disk.

In the dub, Jesse speaks with a Southern American accent (which becomes more pronounced over time) and utilizes southern vocal mannerisms such as "y'all". While possessed by Yubel, it is much thinner and his voice is much deeper and darker. At first, his voice went back and forth between electronic effect and no effect, but as of episode 149, when speaking with his own voice he uses the one with effects exclusively. It's also worth noting that Yubel doesn't usually use her own voice while controlling him in the original, but in the dub she uses it a fair amount. At one point, when she told Adrian Gecko about what Jaden did to her, she used her voice and Jesse's added together. When she did, his body glowed purple. By contrast the Japanese version does not use electronic effects and he has no accent; but his voice is darker while possessed.

In addition, he tends to say "Come out!" when Summoning his monsters during the Japanese Duels. In the Japanese version, Jesse claims that his purpose for Dueling is to Duel for people who believe in their Decks and have strong bonds with their cards.

Similar to Jaden, Jesse possesses the ability to communicate with Duel Monster spirits since he was a child. His spirit partner is Crystal Beast Ruby Carbuncle, whom he affectionately nicknames, "Ruby". Although Ruby is seen most frequently by his side, Jesse considers all his monsters a part of his "family", for they themselves selected him as their master.

Wielding the power of the Rainbow Dragon, Jesse can open a dimensional gateway and even purify Jaden of the power of Nightshroud that tainted his "Polymerization" card.

Invited along with his fellow Overseas Champions from around the world by Chancellor Sheppard, Jesse is the most secretive of his identity even with those he's traveling with. Although he doesn't board the ship that's supposed to take the champions to their final destination, Adrian Gecko expects that Jesse would appear once they reached Duel Academy. He's known as a "ghost" or the "mystery man" until officially introduced during the school's year-opening ceremony. Before this he had already met Jaden Yuki and the two had already become good friends due to their ability to see Duel Spirits. Even so, Syrus and Hassleberry interrupt the two before Jesse has a chance to reveal his name. He turned up late at the opening ceremony, where he had already being labelled missing, claiming he had got lost and apologizes to Jaden for not telling his name. Jaden doesn't seem to mind and the two remain friends.

He is chosen by Thelonious Viper to Duel Jaden in the first exhibition match of the third year and the two are unknowingly fitted with Bio-Bands. Just as Jesse is about to be defeated by Jaden he suddenly reveals the name of his most powerful monster: "Rainbow Dragon". However, he later confesses that "Rainbow Dragon" has not yet been made into a card by Industrial Illusions and that he wishes to find the Roman lithograph from which the concept of his "Crystal Beasts" was derived in order for Pegasus to finally create it.

In episode 115 it is introduced that Jesse has been looking for a Duelist called Trapper whose name is derived from the fact that he takes opponent's cards after winning a Duel, and in the same episode Jesse Duels Trapper and defeats him.

After being drawn into an alternate dimension, Jesse and the rest of Duel Academy are contacted by Dr. Eisenstein, who tells them that the lithograph has finally been found. Securing the lithograph's excavation site, Pegasus has the "Rainbow Dragon" card made and sent to the other world via a Duel Energy-powered wormhole which opened in a battle between Jesse and Zane Truesdale. Jesse later uses the "Rainbow Dragon" when Jaden fought Marcel only to learn their real opponent is Yubel, the Duel spirit that took control of Marcel. Jesse uses "Rainbow Dragon" to get Jaden and the others out while he remains in the alternate dimension to face Yubel, prompting Jaden and his friends to dive back into a rift left open between the worlds to get him back.

Jesse while possessed by Yubel

Although labeled dead by many, he later appears as merely a shadow standing on a cliff near Syrus and Ojama Yellow, but it's later confirmed that the shadow was Jesse in Ojama Yellow's flashback where it spots him. He later reappears in front of Zane and it is revealed that he is possessed by Yubel. After defeating Zane using "Advanced Crystal Beasts" (DARK versions of his regular "Crystal Beasts"), Yubel challenges Adrian to a Duel in order to restore its lost energy. Jesse is able to easily destroy Exodia in the first turn and Summon the Sacred Beasts one after the other in quick succession before fusing them to form "Chaos Phantasm Armityle". When his Sacred Beast strategy fails after they are all removed from play, he switches to survival tactics, keeping Adrian's "Fog King" away from his life points before being able to destroy it. After Adrian suddenly places most of Exodia in his hand with the last piece on top of his Deck, Jesse pulls out all the stops and Summons "Yubel", his second ace card, defeating Adrian and draining Echo's darkness and spirit to restore himself to full strength. 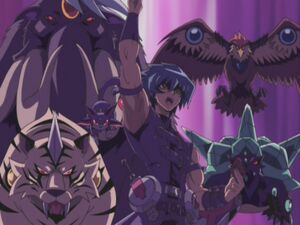 Jesse/Yubel alongside the "Advanced Crystal Beasts"

When Jaden Duels Yubel to save Jesse it is revealed that Yubel actually removed Jesse's soul from his body and placed him inside the "Rainbow Dark Dragon" before taking over. However, when Jaden activates the "Super Polymerization" Spell Card, "Rainbow Dark Dragon" is returned to normal and Jesse is set free, returning to his body. Using its last two cards, Yubel takes "Super Polymerization" using "Last Trick" and ends the Duel in a DRAW with "Thousand Buster". The explosion caused by that card nearly kills Jesse as Yubel leaves his body, but Jaden gets him out in time. Jesse gives Jaden his Deck to help him against Yubel, as he is too weak to Duel himself at the point. Jaden uses "Rainbow Dragon" in order to use "Rainbow Neos". 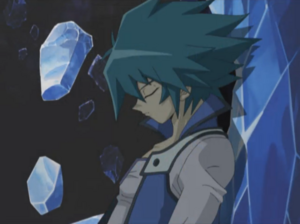 At the beginning of Season 4, Jesse returns to North Academy but he comes back when Jaden is about to leave Domino City. Jaden's "Polymerization" card was tainted in darkness by Sartorius putting his "Arcana Force 0 - The Fool" in Jaden's Deck and he thought Jesse was Trueman. The darkness only lifted once "Polymerization" flew out of Jaden's Graveyard and Jaden saw that Jesse was really the one he was Dueling. Afterward they return to Duel Academy to fight the Trueman army in time to witness the defeat of Atticus Rhodes at the hands of Nightshroud. The two of them then Duel Nightshroud and although Jesse is beaten during the Duel, Jaden continues and is able to use "Rainbow Neos" during it because Jesse was around. Jesse keeps guarding Yusuke Fujiwara while Jaden searches for the source of the darkness that still covers the world and when he comes back to the Duel place it is strongly insinuated that Jesse was assimilated by Nightshroud. However, he is revived with the antagonist's demise.

He then makes a small appearance during the graduation party noting that his graduation at North Academy is held at a different time than at Duel Academy. He, Alexis and Axel stand by the lake and wonder where Jaden went and talk about how they will all see each other again.

Although Jesse does not appear in Yu-Gi-Oh! 3D Bonds Beyond Time, Paradox stole his "Rainbow Dragon", which he used to create "Malefic Rainbow Dragon". Jaden, furious at this, cursed Paradox for this action.

Jesse uses a "Crystal Beast" Deck. His monsters are based on seven precious gemstones collected from around the globe for the construction of a lithograph as evidence of Julius Caesar's reign during the time of the Roman Empire. On its return trip, the ship carrying the stones was battered by a storm, and the treasures disappeared into the depths of the ocean. Employing this concept, Pegasus specially designed and created the "Crystal Beasts", which have the unique ability to retreat in a crystallized Continuous Spell form to their controller's Spell & Trap Card Zone when destroyed as means of avoiding complete annihilation.

Due to the exclusivity of the cards, the Princeton family once attempted to purchase them using all its assets, but were rejected. Instead, Pegasus awarded them to Jesse at the end of a European tournament (in the dub, it was a Southern Tournament). The only "Crystal Beast"-related card not given to Jesse at that time was "Rainbow Dragon", which wasn't even found until Duel Academy was sucked into the alternate dimension. However, when he gets the card, Jesse focuses his strategies around gathering all the "Crystal Beasts" together to Summon it.

While under Yubel's control, Jesse used two Decks. One was an "Advanced Crystal Beast" Deck, which, like Jaden's "Evil HERO" Deck, included darker versions of the original "Crystal Beasts" he owned, as well as a darker version of his "Rainbow Dragon".

This Deck was only revealed when Jesse Dueled Adrian Gecko, but while under Yubel's control, he also ran another variation of the Sacred Beast Deck, which was very different from the version Yubel had used while possessing Marcel Bonaparte. This Deck included cards that could duplicate themselves upon activation or being Summoned to the field (such as "Triangle Force", "Delta Barrier", and "Illusion Brigadier"). With these cards, he could meet the requirements for Summoning each of the Sacred Beasts easily. As with Marcel, several of his cards went by different names in the dub from the TCG. In this Deck, his ace card was "Yubel".