Jin Kolter, known as Jin Kusanagi ( , Kusanagi Jin)[1] in the Japanese version, is the younger brother of Kal Kolter and a character in the Yu-Gi-Oh! VRAINS anime. He was one of the victims of the Lost Incident, and he was the Origin of Lightning; who tortured him during the incident and traumatized him more than the other victims.

During the second season, Jin's soul is kidnapped by Bohman, prompting Yusaku and Kolter to pursue it. He is held hostage by Lightning, who feared that Jin would turn against him.

Jin is a fair skinned teenage boy and he strongly resembles Kolter. Like Kolter he has grey eyes and purple hair, but his hair is long and unkempt, reaching past his shoulder and it is lighter shade than his brother. He is depicted wearing a dull-colored shirt with sleeves ending halfway down his elbows and pants. As a child, he had short hair and wore a short-sleeved, light blue shirt and a pair of khaki shorts. In LINK VRAINS, Jin retains the same appearance, but wears a more ornate outfit. He wears a white sword-shaped mantle with a gold border and a purple tip and shoulderpads, which are tipped with gold pauldrons. The mantle has a prominent black high collar lined with golden and patterned with a lightning symbol. Under this mantle he wears a long white coat with a purple band at the hips below an orange belt, and with golden edges. He also wears black gauntlets with golden cuffs, white boots with black soles, and black "flared" pants. As with other members of Lightning's organization, he has Lightning's star symbol on his outfit; an orange version on his mantle over the chest and prominent golden ones embedded in his gauntlets and boots. Prior to Lightning revealing his identity, Jin is cloaked in black with a gold aura. Later in the arc, his collar is closed and covers his mouth. 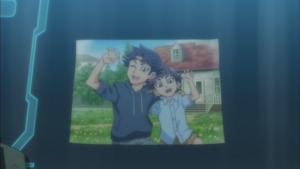 A photo of Kolter and Jin as children.

After being rescued from the Hanoi Project, Jin developed intense PTSD and even now he is still suffering from PTSD. Since the events of the Lost Incident he has become withdrawn, reserved and has closed off his heart from the world. In the dub, Lightning claims that Jin was so tormented by his methods of torturing him through tricking him that he was rescued that he never believed he had been rescued from the Lost Incident. As a child based on the picture of him and prior to getting kidnapped for Hanoi Project he appeared to be cheerful and outgoing. He returned to this personality after his memories of the Lost Incident were erased by Lightning.

After the Knights of Hanoi were defeated and Kal began visiting him more often, Jin began making progress towards his recovery over a period of three months.

Both Jin and Yusaku were victims of the Hanoi Project 10 years ago.[2] During the Project, Jin was forced to Duel with a VR headset, suffering from electrocution and starvation if he lost. Unlike the other children, Jin suffered additional psychological torture from the Ignis that was created from him, Lightning, whole showed him visions of people arriving to rescue him and them turning into monstrous skeletons. Jin was rescued with the other children when Ryoken Kogami alerted the authorities, but still suffered from the shock of the Incident despite treatment due to the extra trauma that Lightning had inflicted on him.[3] This event drove Kal and Yusaku to fight for him, and defeat the Knights of Hanoi so that Yusaku might save him from darkness.[4]

Jin is mentioned several times by Yusaku Fujiki and Kolter during their fight against Hanoi.[5] After Kolter discovered the true identity of Blue Angel, Yusaku's classmate and step sister of SOL Technologies Security Manager Akira Zaizen, Kolter suggests Yusaku meet her so that he can get a lead on Akira regarding Jin as well as Yusaku's stolen memories, but he doubted the plan would work due to Yusaku's poor social skills with women.[6]

He was indirectly mentioned during Playmaker's Duel against Varis as the former vowed to Varis that he would save him.[7] While Yusaku and Kolter were deleting the files of Playmaker that people post on the network, Yusaku wondered if it was wise to seek Varis out for answers about Yusaku's past and about Jin.[8]

When Kolter was writing his report, he also wrote that he still thought of his brother, Jin, and wished that the reader of this report would tell that to his brother when they meet him.[1]

Kolter visited Jin three months after the events involving the Tower of Hanoi, and the doctor told him that Jin was making progress possibly due to hearing that the Incident that haunted him had come to an end. Kolter later asked Jin if he wanted to come and live with him at Café Nom, but before Jin could answer, a glowing figure stepped out of his television and extracted Jin's consciousness, escaping with it into LINK VRAINS and leaving Jin comatose in the real world. Kolter called Yusaku, begging him to get Jin back.[9]

Despite Playmaker's best efforts, he was unable to get Jin's data back.[10] Jin was taken to the Ignis that had been created from him, Lightning, who enslaved him to prevent him turning against him and rendered him unable to speak or act, but fully conscious and aware of events around him.

Lightning concealed Jin from Ai when he called him to talk to him,[11] only revealing Jin's presence after the Duel between Varis and Windy.[12] Lightning had Jin escape, using him to squeeze Windy's remains to force Windy to unleash a Data Storm to separate Playmaker and Soulburner and allow Bohman to challenge the former to a Speed Duel.[13] After the Duel concluded with no victor, Lightning escaped with Jin.[14][15]

Lightning used Jin's Avatar to Duel Specter when Playmaker's team arrived in Mirror LINK VRAINS.[18] Lightning defeated Specter and claimed his data. Jin squeezed it in his hand, but Lightning ordered him to leave the data alone, as it could still be useful.[19]

After Windy was defeated by Soulburner and Bohman defeated Blue Maiden, Lightning held Jin's data hostage to force Kal to Duel Playmaker.[20] Playmaker defeated Kolter, but passed out from the trauma, so Lightning had Jin violently throw Playmaker's Avatar around to wake him up for a Duel until Bohman talked him down. The barrier Lightning had erected to imprison Playmaker's team in Mirror LINK VRAINS was then destroyed, and Lightning received a message from Varis, transporting away with Jin.[21]

Jin watches in fear as his fate is held in debate.

Lightning and Jin transported to Varis's island, and Lightning used Jin's Avatar to Duel Varis.[22] Varis was able to corner Lightning, but before he could declare his final attack, Lightning linked Jin's data to his own and released him from his control, ensuring that Varis would destroy them both if he continued his attack.[23] Jin watched in terror as Lightning, Varis and Playmaker debated over the notion of sacrificing him; fortunately, Playmaker was able to convince Varis not to attack. Bohman then took Jin's data from Lightning to force him to Duel fairly, but Lightning was able to retain a small portion of Jin's consciousness data; continuing to Duel with a projection of Jin's Avatar. When Lightning used the effect of his "Armatos Legio Eques Flamma" to inflict damage to both him and Varis, he converted the portion of Jin's consciousness data he had into LP, allowing him to survive the Duel with 1 LP.[24] Unbeknownst to everyone at the time, this act erased Jin's memories of the trauma he had experienced during the Lost Incident.[25]

After Bohman was defeated, Jin's data was returned to his body and he woke with no memory of the Lost Incident. With the trauma he had experienced effectively gone, Jin's mental state improved drastically, though he still remained hospitalized, with Kal often coming in to visit him.[26]

While controlled by Lightning, Jin plays a "Armatos Legio" Deck