Joey Wheeler (The Sacred Cards and Reshef of Destruction)

Joey Wheeler is a character in Yu-Gi-Oh! The Sacred Cards and Yu-Gi-Oh! Reshef of Destruction. This is a video game depiction of Katsuya Jonouchi from the manga and Joey Wheeler from the anime.

Joey and Yugi Muto visited the player the day of the Battle City tournament. Having spent the night working on his own Deck and being satisfied with the result, Joey asked if the player had done the same. The trio then went to the Clock Tower Square for the commencement of the tournament. Shortly before it began, Joey declared the three friends to be rivals from that point and asked them not to lose until the finals.

After Joey and the player each won their first Locator Card, they could optionally Duel each other in the toy shop.

Joey met Marik Ishtar, who was using the disguise "Namu" to get close to the friends of the player. The two seemed to hit it off well and Joey brought him to the toy shop.

When taking a break from Dueling, Joey went to the arcade in the building to play games, but decided to get back to Dueling after seeing the player's progress.

At the aquarium, Joey lost a Duel to Mako Tsunami. He could not find any weak points in Mako's Deck and asked how the player thought he might be able to win. Joey allowed the player to repeatedly challenge him to Duels with no Locator Cards on the line, before the player Dueled Mako. When Mako lost to the player, Joey tried to cheer Mako up. He was also slightly upset, as he had hoped to beat Mako himself. 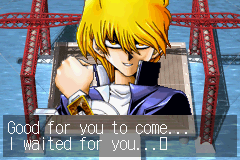 Joey was brainwashed by Marik Ishtar and sent to the game shop to collect Tea Gardner, who was also brainwashed. A Ghoul was sent back to the shop later to warn the player and Yugi that Joey and Tea had been kidnapped and threatened to take their lives unless the player and Yugi handed over their Decks and quit the tournament.

When Mai Valentine learned of the kidnapping she suggested that Yugi and the player go to Seto Kaiba, who should be able to locate Joey using the transponder built into his Duel Disk. Although Kaiba was not interested in helping Joey, he agreed to help due to his dislike of the Ghouls and located Joey at Domino Pier.

Under the influence of Marik's mind control, Joey challenged Yugi to a Duel at the pier, where the loser would be dragged into the ocean by an anchor. Tea's life was put in danger to force Yugi into accepting. Unable to bring himself to beat his friend like this, Yugi lost the Duel, but was saved from drowning to the player. Yugi then made a plea to Joey, reminding him of their promise to meet in the finals and managed to break him free from Marik's influence. Joey then apologized for his actions and vowed to face Marik in the finals.

Joey went back to the toy shop with Yugi, Tea and the player. Anxious over being one Locator Card short of qualifying for the finals, with time was running out, he left the shop to find an opponent. After getting his sixth, he returned to the toy shop and identified the stadium site as the location for the finals. He was relieved when they arrived at the stadium shortly before the cut-off time. His lateness was noted by Mai, who had begun to think he had been knocked out, but Joey said he was not about to lose easily. When Odion, posing as Marik Ishtar, arrived as the last finalist, Joey vowed not to let him get away. The finalists then boarded the airship for the next stage of the tournament.

The Ultimate Bingo Machine matched Yugi and Bakura as the players in the first quarterfinal. Joey said that this would be a must-see Duel, but was worried it might end like before. He spectated on the Duel and watched Yami Yugi beat Yami Bakura.

Joey questioned Yugi's suspicions on Odion not really being Marik before the next quarterfinal and urged the player to stomp Odion in the next Duel.

The following cards can be won from Joey by the ante rule, provided the player does not wager a low-level ante card. The chance of winning a card is indicated by the "%" (chance out of 100) and "2048th" (chance out of 2048) columns.