This article describes the appearance of Joey Wheeler in storylines that are not part of the main continuity in the Yu-Gi-Oh! manga, first series anime or second series anime.

In Yu-Gi-Oh! R, Jonouchi, as usual, lends Yugi a hand when Anzu is kidnapped by Yako Tenma and KaibaCorp is taken over. Jonouchi provides his usual comic foil for the first few chapters, though he does get the key out of Tilla Mook. His first major role comes when he picks up a "Booby Trap" card that turns out to be a literal booby trap. Jonouchi (and Honda, who went in after him) is dumped down into KaibaCorp's basement where he has to face the third Card Professor, Klamath Osler, who he defeats by using "Roulette Spider" to make Klamath's own "Antlion" attack him.

Jonouchi later encounters a laboratory run by the fifth Professor, Pete Coppermine. Impressed that Jonouchi beat Osler, Coppermine bets Jonouchi 10,000 Yen that Jonouchi could not defeat him. Through clever use of Trap Cards, Jonouchi allows his "Divine Knight Ishzark" to attack twice, depleting Coppermine's Life Points with one move.

Jonouchi's next opponent before returning to the group is the seventh Professor, Mendo Cino. This duel is longer and more taxing to Jonouchi than the others, and even with the help of "Jinzo" he is not able to win easily. His victory comes when he uses "Stop Defense" to force Cino's "Guard Mantis" into Attack Position, and then striking it while it is weak. Cino, who had belittled Jonouchi throughout the duel over the fact that Jonouchi's tactics were inferior to his own, was impressed by his win and gracious in defeat.

Jonouchi's next Duel is against Reiko Kitamori, the tenth Professor. He has to intimidate her into dueling, but once he gets her angry, she proves to be his strongest opponent yet. He finally defeats her by using "Relentless Attacks" to allow his "Gilti-Gearfried the Magical Steel Knight" to attack twice. After this Duel, he is picked up by Mokuba and taken to the place where Yakou is by him.

Later, he has a rematch with Bandit Keith who has The Wicked Eraser and is able to beat him by using Keith's Time Machine which Jonouchi stole after beating Keith the first time in Duelist Kingdom arc. This is Jonochi's final Duel in Yu-Gi-Oh! R.

Yu-Gi-Oh! the Movie: Pyramid of Light[edit]

In Yu-Gi-Oh! The Movie: Pyramid of Light, which takes place after the Battle City tournament, Joey and Tristan hold back a crowd of people who want to duel Yugi for his Egyptian God Cards. Joey begins dueling them to hold them back. He and Tristan later dash to Kaiba's duel dome to watch Yugi's duel against Kaiba and Anubis. 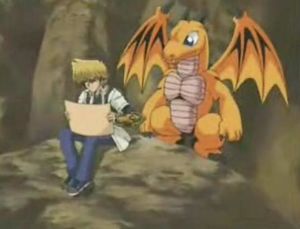 Just when the plane approached its final destination, the engines cut out and the aircraft crash lands in a mysterious forest. After Joey and his friends evacuate from the aircraft, they find a man who says his name is Dr. Alex Brisbane. When Yugi lets slip to Brisbane that he is Solomon Muto's grandson, Brisbane tells him that he's a colleague of Solomon, and on their latest expedition together he disappeared. Brisbane takes them to what he believes it to be the legendary pyramid of Alexander the Great.

Inside the pyramid, the four friends step on map, causing them to enter a strange world. Here Joey unlocks a living Baby Dragon, together they find a treasure chest, containing a clue to a trial. Joey later meets up with his friends. Together they had to complete a series of trials to leave. The gang meet up with Alexander the Great on occasions, where he helps them out. They also find Yugi's grandfather.

Joey later separates from the gang. Next time they met him he was possessed and wearing Red-Eyes Black Dragon fashioned armor and he stops the party from acquiring the sword needed to complete the present trial. After Yugi brings Joey to his senses, Joey gets separated from the armor, which turns into Red-Eyes Black Dragon. Joey then removes the real sword from Red-Eyes, which had possessed both of them.

Together the friends complete the tasks and Shadi offers Yugi power as a reward. Yugi claims he doesn't want it. They are then confronted by Alexander the Great, who wants to take the power. Alexander and his followers have a face-off against the friends, who all summon monsters they acquired throughout the trials. Yugi, Joey, Téa, Tristan and Solomon are then returned to the Pyramid.