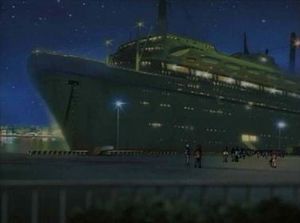 The boat used for the journey. 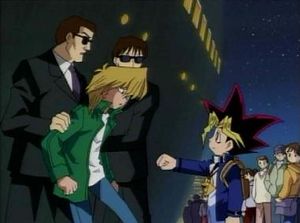 Participants met up at Domino Pier in order to board the ship. Yugi Muto and Joey Wheeler noticed they would have tough competition in the tournament when they saw the finalists of the Japanese National Duel Monsters Championship, Rex Raptor and Weevil Underwood were present. Yugi and his friends also met Mai Valentine here.

In the manga, Yugi's friends weren't shown to have any problem boarding the ship despite not being officially invited. In the anime, Téa Gardner and Tristan Taylor had to sneak into the cargo hold. Bakura Ryou also managed to sneak onto the ship. Joey got into a bit of trouble with the officials who saw him boarding without any evidence that he was in the tournament. However Yugi spotted him and gave him one of his Star Chips, entitling him to take part in the tournament. 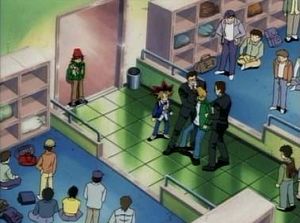 The common area where participants were to sleep.

Kemo led the participants to a common area, where they would have to sleep on the floor for the night, with the exception of finalists from the National Championship. Joey and Mai both complained about this to no avail. Weevil explained to Yugi that there was some advantage to spending the night in the common area, rather than a room; he could trade cards to improve his Deck and get a peek at what cards other players will be using. Joey then immediately started looking for trades. 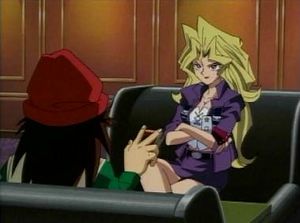 While Mai was complaining about having to sleep in the common area, she noticed Rex had a room. When Rex invited her to share his room, she accepted and started acting interested in him.

Inside Rex's room, Mai said that she liked strong men, as long as they're stronger than her and challenged Rex to a Duel. If Rex won, she would do whatever he wanted all night long and if she won, she would get the room. Mai used her Aroma Tactics to put Rex off and defeated him. After which, she kicked him out of the room. 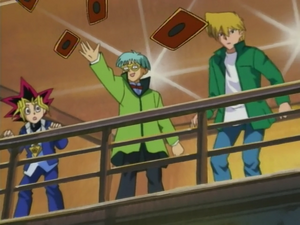 Weevil spoke with Yugi on the Deck later that night. While discussing Yugi's Deck, Weevil asked if he could see his "Exodia" cards. Since Weevil already knew he had the cards, Yugi didn't see the disadvantage to letting him look. However Weevil said that he spent a long time trying to think of a way of defeating "Exodia", to no avail until now. He then threw the cards overboard. 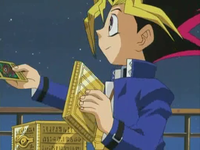 "Time Wizard" as a Normal Monster.