Jukyu Goriki ( Gōriki Jūkyū), called Strong Jukyu (ストロング Sutorongu Jūkyū) by his friends, is a character in the Yu-Gi-Oh! OCG Structures manga. He is a serious Duelist, and was called one of the Four Duel Kings during Elementary school.

Jukyu is known for being a strong duelist, having earned his nickname himself. He is also a regular visitor of the Satellite Shop, as he's quite familiar with the staff. 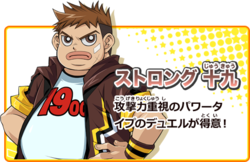 He was present during the Rising Rampage Deck Construction event, where an odd number of participants left him without an opponent. However, he quickly noticed Shoma Yusa, a newcomer, and invited him to play, which Shoma eagerly accepted. During the Deck construction period the event, Jukyu decided to build a "Simorgh" Deck from the cards he obtained, and soon began his Duel against Shoma.

Jukyu started strong during the Duel, pulling all the cards in his hand together to bring about his "God Strong Wind" combo, featuring three high-Level monsters in a single turn. However, while this combination of monsters was indeed strong, as it prevented Shoma from effectively countering using Spell or Trap Cards, Jukyu didn't read any other of the cards present in Rising Rampage, and so had no answer to Shoma using the wide array of effects present on his "Tenyi" monsters to swiftly break his combo. Jukyu persevered, but in the end was defeated by Shoma and his large collection of cards to pull from.

In a show of theatrics, Jukyu throws himself backwards upon his defeat. Despite his defeat, Jukyu was content to find a good opponent in Shoma, and the two quickly became friends after their Duel.

Jukyu has used multiple Decks during his time as a Duelist. During the course of the manga, the first Deck he is shown using is a "Simorgh" Deck he built during the Rising Rampage Deck Construction event. He supplemented this Deck with "Mist Valley Apex Avian" from his own collection, for its powerful negation ability.

During the Team Battle tournament, Jukyu uses a "Dragunity" Deck.

During the finals of the "Challenge the World Champion" event, Jukyu builds a "Lyrilusc Tri-Brigade", which features and perfects his classic "Simorgh" combo.