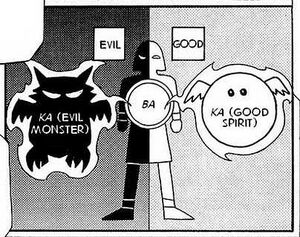 Ka, also known as an Egyptian Spirit Monster, are monsters that were used in ancient Egypt. The Ka are spirits that reflect the nature of the person that they come from. They are fueled by the energy of the soul, the Ba.[1] The strength of the Ba determines the strength of the Ka. A person with a good soul will have a spirit or good Ka, but a person with an evil soul will have a monster or demon Ka.[1] With the Millennium Items, The Sacred Guardians were able to seal the Ka of a person within a stone slab and would be capable of summoning and controlling them from the Shrine of Wedju.[2] Maximillion Pegasus later would discover the ancient Shadow Game and the stone slabs and created Duel Monsters where the cards had similar effects to the slabs. Some of the spirits haven't been released as cards.