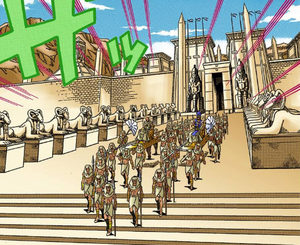 The ka hunt was a search overseen by Seto, in which he hoped to harvest powerful ka to be used by the High Priests and the pharaoh. This event took place in the Yu-Gi-Oh! manga and anime.

Seto examined civilians for potentially powerful ka and took them captive. While imprisoned, the civilians were pushed to physical limits to strengthen their ka. Seto knew that in the interest of peace, Pharaoh Atem would not consent to the hunt, but thought it was necessary for the priests to engage in such shadow politics, in order to protect the kingdom. After Bakura, King of Thieves attacked the pharaoh's palace, Seto discussed the state of affairs with Akhenaden. Seto deemed Bakura too dangerous to be kept alive. They worried that the ka gathered in the Shrine of Wedju were not enough to compete with Diabound, which Seto accredited to them only collecting ka from criminals. However Akhenaden reminded him that Bakura was also a sinner and theorized that his ka's strength came from his level of hatred, suspecting Bakura to be a survivor of the Kul Elna massacre.[1]

Seto proposed that they conduct the ka hunt, where they would take civilians with promising-looking ka and inflict agony upon them. This would provoke hatred and strengthen the ka, which could be turned into weapons. Akhenaden thought the idea was insane and knew the pharaoh would not consent. Seto rationalized that in having the stature of a god, the pharaoh must maintain peace, but in desperate times, it would be necessary for the priests to employ shadow politics to protect the royal house.[1]

Shada argues with Seto over the ethics of the hunt.

Following Mahado and Bakura's Diaha, Seto asked for Atem's permission to take his men to the city in search for Bakura, secretly intending to perform the ka hunt. He invited Shada to come with him, since Shada had the Millennium Key, which allowed him to see people's ka.[2]

As, Seto, Shada and the soldiers set out, Seto informed Shada of the true intentions of their search and asked for his help. Shada objected to examining the hearts of innocent people, but Seto began to sway him by pointing out that in their current state, they might not be able to protect the country from someone like Bakura.[2]

In the city, they gathered civilians outside and Seto instructed the guards to arrest anyone who refused to leave their dwellings.[2] 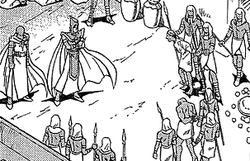 A criminal brought before Seto and Shada to have his ka examined.

Some of Seto's men found an exiled criminal in the Winking Camel bar and brought him outside. Shada examined the man's heart and saw the ka, Saggi the Dark Clown. He reported that it had a low level, but could become a threat if let grow unchecked. Seto ordered that the criminal be taken to the underground prison. He informed his soldiers that they would limit their search to criminals, but would show them no mercy. He then had another man brought to Shada, but Shada could not bring himself to do it and asked Seto to stop. While Seto claimed it was necessary for them to enforce authority to protect the kingdom, the previous criminal they checked accused Seto's actions of not being authority and warned him that he would be judged by a god, The White Dragon.[3] 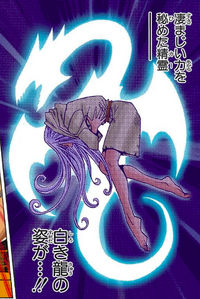 During their search, Seto and his men happened upon Kisara, who was being stoned by people, who believed her to be a witch. Seto condemned the people for their actions and asked his men to take care of Kisara. The Millennium Key suddenly began to react to Kisara. Shada reported that her heka was immeasurably high and she possessed a ka in the form of a white dragon.[3] Seto instructed his men to take Kisara to the palace and told them not to speak to the pharaoh of their actions.[4]

During the search, Seto and his men gathered about twenty people and confined them to the prison tower, knowing that the pharaoh never goes there.[5]

Seto reported the progress of the hunt to Akhenaden, who feared that they were steering down the path of darkness and urged Seto to release the prisoners. Seto was unconvinced and informed Akhenaden that he had found someone with a ka, whose power rivaled the gods. He was allowing the ka's hostess, Kisara, to rest and planned on finding a way to draw the greatest power from the ka, after she regained her strength. To find out how to do that, he planned on torturing the other prisoners, in the interest of research.[5] 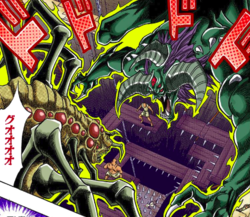 The captured ka, strengthened by forcing the prisoners to fight to the death

Akhenaden worried Seto was going to commit the same sin he did when he created the Millennium Items.[5] But after being corrupted with Bakura's evil, following an attack,[6] Akhenaden's views on the matter drastically changed and he became more merciless. When Atem went missing, Akhenaden became keen to make his son, Seto, the new pharaoh and have him wield the power of The White Dragon.[7]

Gebelk had been tasked with finding the best way to strengthened the ka of the prisoners. He found that by invoking the prisoners' desire to live, by forcing them to fight to the death, their ka became drastically stronger.[7] When Kisara regained consciousness, she was taken to Gebelk, who suggested they make her fight the prisoners.[8] This revealed that her ka was indeed powerful and seemed to be a manifestation of her ba that only emerged while she was asleep.[9]

Akhenaden was impressed with The White Dragon, believing its power to surpass that of Diabound and the three legendary gods. He asked Gebelk about transferring the dragon to Seto. Gebelk explained that it would mean releasing Kisara's soul from her body, which Seto objected to, knowing it would mean her death. Akhenaden again emphasized that they needed to do this to make Seto the new pharaoh, but Seto suggested they not get ahead of themselves and focus on finding out what happened to the current pharaoh.[9]