From Yugipedia
Jump to: navigation, search
For other versions of this character, see Kagemaru (disambiguation).

Kagemaru (影丸) is the ultimate antagonist of the first season of Yu-Gi-Oh! GX, as well as founder and former chairman of Duel Academy.

The "Kage" portion of his name is derived from the Japanese word "kage" 「影」, meaning "shadow," while the "maru" portion means "circle" or "perfection". Therefore, this character's name could mean "shadow perfection". Another interpretation is "shadow of perfection," perhaps referring to his failed attempt at becoming immortal, or "perfect". "Maru" is also a common end for male Japanese names.

Kagemaru was the leader of the Shadow Riders and at some point in the past, a former chairman and creator of Duel Academy. His Shadow Charm was a small ring. In horrible health, he hoped to attain eternal youth by sacrificing Duel Monster Spirits to the Sacred Beasts, gathering the Seven Stars to help him accomplish that purpose. 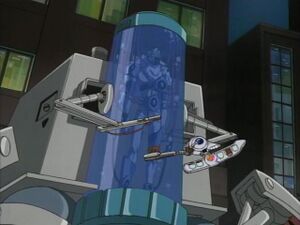 He was first involved in the series as an unseen figure talking to Professor Banner through his computer screen, telling him that it was an appropriate time to test Jaden in the Gravekeepers world. Banner argued Jaden might not be ready, but Kagemaru said it mattered not, and he simply would have no use if he failed.

He is next seen with the Shadow Riders, asking which one would make the first move, with Nightshroud revealing he would act. After Dr. Crowler loses to Camula, he appears on a screen in Chancellor Sheppard's office, taunting him that two keys have already been lost, and wondering if anymore students would fall to the vampire.

In Titan's flashback in how he escaped the World of Darkness, Kagemaru was shown reaching out to him giving him his item, and promising him freedom if he would serve him and defeat the key holders. 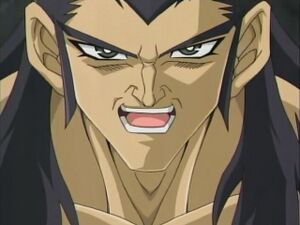 Kagemaru, after gaining youth through the power of the Sacred Beasts

After the seventh Rider, Amnael falls, he finally makes his existence known to Jaden and the others, being air-lifted in via helicopter, in his stasis tube. In the original, he said that he created Duel Academy to have a space full of the fighting spirits of duelists to revive the 3 Sacred Beasts. Many students challenge him to a fight, however he only accepts a Duel with one student - Jaden. During the Duel, He Summons all three Sacred Beasts, and they gradually absorb duel spirits which eventually restores him to a muscular much younger form. Jaden struggles against the Sacred Beasts, but ultimately manages to come out on top. After being defeated, he returned to his aged state, and promised to renounce his former ways and asked for forgiveness, which Jaden was happy to give. Kagemaru was then carried to the hospital via helicopter after Jaden accidentally crushed his spine with a bear hug. 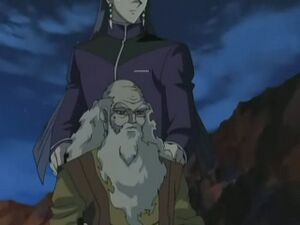 Kagemaru returns to Duel Academy with Sartorius to tell Jaden that they have both had some sort of premonition, feeling that Duel Academy might be in grave danger, theorizing that the Sacred Beasts, Light of Destruction, and Yubel incidents might be related. Both Kagemaru and Sartorius are later present at Jaden's graduation ceremony.

Kagemaru plays a Sacred Beast Deck. He utilizes plenty of Spell and Trap Cards to support "Uria" and "Hamon", some of which Summon tokens he can use to support "Raviel".