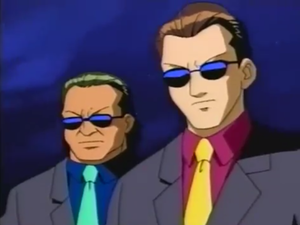 Kaiba's bodyguards are two characters in the Toei Yu-Gi-Oh! anime. They were tasked with guarding Seto Kaiba and would carry out disreputable tasks at his behest.

At least one of the bodyguards is voiced by Naoki Imamura.

Kaiba got his bodyguards to help him take cards from students at Domino High School, using force where necessary. They cornered one schoolboy on the roof of the school, demanding his "Dark Magician" card. They boy insisted that the card was a memento to his father and begged them not to take it. They proceeded to beat him and Kaiba arrived in time to take the card. One of the bodyguards then reported that he now acquired all of the cards Kaiba wanted from that school.[1]

Katsuya Jonouchi and Hiroto Honda noticed Kaiba stealing a "Blue-Eyes White Dragon" card from Yugi Mutou and confronted him over this on the roof of the school. However Kaiba had his bodyguards beat them up. Yugi arrived shortly afterwards and Kaiba told him that Jonouchi and Honda had made a false accusation against him. However Yugi was aware that Kaiba had taken the card and pleaded with him to return it. When Kaiba grew tired of Yugi's persistence, he left his bodyguards to deal with him. However Yugi changed into Dark Yugi, who managed to injure the bodyguards and leave them unconscious.[1]