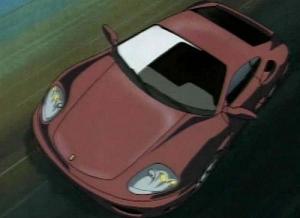 Kaiba's car was a red sportscar, based on a Ferarri 360, which Seto Kaiba used for a short period of time in the anime.

While Seto and Mokuba Kaiba were on their way to get to Paradius headquarters, Orichalcos Soldiers were loose across the world. The Kaibas went to a car dealership to get some quick transport. Mokuba picked out the car and the two of them got inside. The salesman tried stopping them, but Kaiba whipped out a checkbook and wrote a check for $500,000 (US) and sped off, leaving the salesman dumbfounded.[1]

One block from the Paradius headquarters, they were stopped by Orichalcos Soldiers and got out to fight.[2] After defeating the soldiers, they went back into the car and continued to drive, but got out again when they met Téa and Tristan. A swarm of rats with glowing red eyes ran towards the group, causing them to climb to safety on a fire escape, abandoning the car.[3]