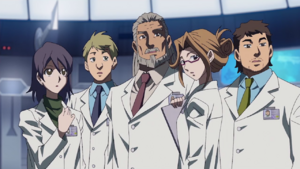 The Kaiba Corporation researchers (コーポレーション or カイバコーポレーション Kaiba Kōporēshon kenkyūin)[1] are a crew in Yu-Gi-Oh! The Dark Side of Dimensions, who contributed to Seto Kaiba's projects, relating to his attempts to Duel Pharaoh Atem, who had departed to the underworld.

Two such crews appear in the film, including a team of lab technicians and a team of engineers.

In the Japanese version, the researchers were named after members of the animation production team.

The engineers, including Tanda (left)

Engineers from this crew, worked at the Valley of the Kings excavation to retrieve the Millennium Puzzle.[2]

The lab researchers worked in the virtual Dark Yugi reconstruction of the pharaoh. Following Kaiba's Duel with him, they regarded the battle a success, but Kaiba was dissatisfied. Regardless of how accurate they had reconstructed the pharaoh, it was not the real thing, making it inadequate.[2]

The crew conducted the necessary preparations for the robot to reconstruct the Millennium Puzzle in space and noted Kaiba of their progress at the earthport, before Kaiba departed to the space station.[2]

In the English dub, three of the crew members' voice roles were given to winners of the 4K Media Inc. voiceover contest:[3]