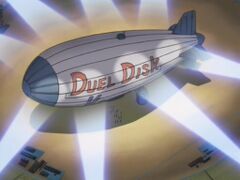 The Kaiba Craft 3, known as the Battle Ship in the manga and Japanese version, is the blimp, where the Battle City quarter finals took place.

After the Battle City Finals, the duelists had to leave the blimp since it wasn't working and the island of which the final duels were held was going to self-destruct in less than 30 minutes.

The appearance of the blimp was altered in the English version, by digitizing out the "DUEL DISK" words written on the side.