The Kaiba fangirl is a character in Yu-Gi-Oh! The Sacred Cards, who is obsessed with Seto Kaiba.

The player can meet her at two points in the game and Duel her just once in either location. She falls into the category of building generic Duelists or bridge generic Duelists, depending on where the player Duels her. 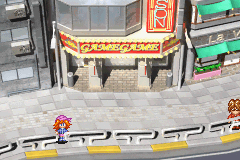 The Kaiba fangirl, outside the building

The girl first met the player outside the building. She admitted to being a fan of Kaiba and asked if the player knew where she could find him. If the player challenged her to a Duel, she warned him not to treat her as if she were an ordinary groupie, since she is surprisingly tough. After losing she admitted that the player was strong, but not as strong as Kaiba and refused further challenges as she needed to find Kaiba.

The girl went to the bridge underpass where Seto Kaiba had been spotted Dueling. However she arrived just after he left. If the player had not Dueled her at the building, he could Duel her here instead.

After learning that the player qualified for the Battle City finals, Kaiba's fangirl asked that he lose to Kaiba without causing too much of a fuss.

The fangirl uses a different Deck, depending on where the player Duels her.

The fangirl uses different ante pools, depending on where the player Duels her.