Kaiser Umiuma, known as Emperor.Umiuma in the Tag Force games, is a cosplayer parodying Seto Kaiba, who makes appearances in V Jump and some video games.

His name, "Umiuma", is an alternate reading of 海馬, which can also be read as "Kaiba".

Kaiser Umiuma was present at a preview of Yu-Gi-Oh! 3D Bonds Beyond Time.[2]

Kaiser Umiuma took part in The Third Charisma Duelist Determining Fight Tournament. He lost to Dueluka in the first round.[3]

In the Tag Force series, Umiuma runs a company called UmiumaCorp, and makes appearances with his employees, Inoso and Mokuma, who are parodies of Roland and Mokuba Kaiba, respectively.

Emperor.Umiuma is involved in a feud with Sanzyudai Yuki, and asks for the player's aid in defeating him. He appears in the morning at the Volcano after the player has completed the Story Mode with 3 or more Page 1 characters.

To his annoyance, Umiuma is partnered with Sanzyudai Yuki, and in order to be allowed to change partners, he must duel at least once. He challenges the player and his Partner to a Duel, and upon victory, he allows the player to partner with him. He appears during a special random event at the Main Gate if the player defeats either Jaden or Chazz at least 15 times.

Kaiser Umiuma appears as a downloadable Ghost Duelist for August 2010.

Kaiser Umiuma appears as a downloadable Ghost Duelist for October 2011.

The localizations of Tag Force 2 ignored the wordplay behind Umiuma's name for his Decks, erronously reading it as "Kaiba". 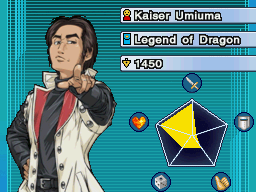 Kaiser Umiuma, in Reverse of Arcadia.