Kameno is a character appearing in the 5D's installments of the Yu-Gi-Oh! World Championship video games.

Kameno is the third opponent the player must defeat to rescue Blitz.

Kameno is part of a Duel Gang with Ida and Kuroe.

Kameno is one of Syd's henchmen, and he is faced in a Tag Duel, partnered with Ida, in Chapter 6.

After finishing the game, the player can duel him at the Facility.

Kameno's Decks are always titled "Lucky Turtle Shell", but their contents and strategies are different in each game.

Their name is derived from his own - "kame" means "turtle" in Japanese. From World Championship 2010 onwards, Kameno begins using a number of turtle-themed cards as well as other cards whose japanese name include "kame", such as "Jar of Greed" (な, Gōyoku na Kame) and various mask-themed cards ("mask" in Japanese is "kamen"). 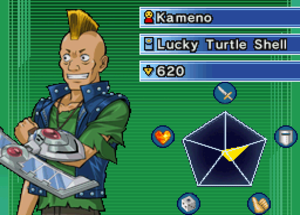 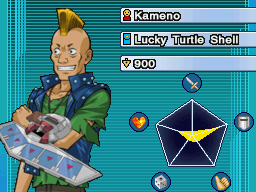