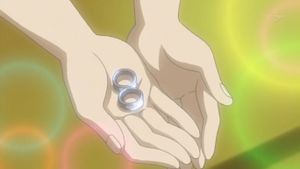 The Kastle twins' rings, or the Kamishiro twins' rings in the Japanese version, are a set of rings belonging to the twins, Rio Kastle and Reginald "Shark" Kastle.

In their childhood, Rio obtained the rings when she and Reginald attended to a theme park. She suggested to Reginald that they could each wear one. However he declined, causing Rio to throw the rings away and call him an idiot. Years later, after Rio became injured in a fire, Reginald began wearing both rings in tribute to his and Rio's childhood bond. Shortly before Rio was discharged from the hospital, Shark gave her one of the rings.[1]

After losing her Duel with Vector, Rio dropped the ring that Reginald gives her, before fading away.