Kaz, known as Soichi Kazama (風馬走一, Kazama Sōichi) in the Japanese version, is a Sector Security officer who becomes an ally of Jack Atlas after he captures Syd Barlow's gang to avenge Kaz after he is hospitalized.[1] 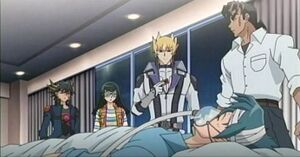 Kaz first appeared when he infiltrated Syd Barlow's gang in order to find out the location where they were stashing stolen Duel Runners which they intended to sell as the World Racing Grand Prix had increased the price of Duel Runners. During a heist, Jack Atlas and Carly Carmine hide and intend to find out the identities of the thieves, but Jack chases them onto the highway. Seeing this, Syd points a gun at Jack, intending to shoot him, but Kaz gets in the way and as a result, his Duel Runner is shot and explodes, sending him flying onto the highway. Jack stops and runs to Kaz to check if he is alright. At that moment, Tetsu Trudge drives past and shouts at Jack as he ruined Kaz's mission. Kaz is later sent to hospital. Jack goes to visit him, and decides to take his "Chaos King Archfiend" card as a symbol of his bravery and goes after Syd and his gang. 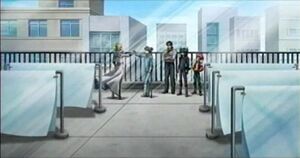 After several failed attempts, Jack manages to locate their base of operations (which turns out to be a ship) and Duels Syd. During the Duel, Syd mocks Kaz's failure to which Jack then manages to summon his card, and defeat Syd. He then manages to shut down Syd's gang and their operations, handing them over to Sector Security. Kaz soon recovers and thanks Jack for all of his hard work. Jack then hands Kaz his card back and they shake hands and leave as friends.[1]

When Jack is accused of destroying Duelist's Duel Runners during Duels, Kaz pleads Jack's innocence to Trudge as he Duels with respect. Trudge agrees with Kaz, but as all of the evidence points to Jack as the criminal, his hands are tied.[2]

After the impostor Jack Atlas defeats the real Jack in a Duel after he escaped from prison, he begins to wreak havoc on the highway as everyone would think he was the normal Jack. During this, Kaz leads a troop of security officers after him, pleading him to stop. The impostor responds by smashing a tunnel's lights, causing the rest of the officers to crash. Kaz continues to chase the impostor and is soon joined by Yusei and Crow who reveal that he is an imposter. Jack later escaped from where he was being held prisoner and Duels the impostor. During this, Carly sneaks onto the highway and Kaz scolds her as the highway wasn't meant for vehicles other than Duel Runners. After Jack wins, Kaz congratulates him and tells him that he'll clear his criminal record and reveal what really happened.[3]

Kaz appears in front of the Memorial Circuit alongside other security officers after Primo unleashes the Diablo onto the Neo Domino City highways which then began to attack the Dueling participants. He teams up with Jack Atlas and manages to defend a Team Burning Duelist from a direct attack from "Ally of Justice Clausolas" thanks to his "Battle Eater". He then manages to defeat several members of the Diablo with Jack before they retreat in order to go after Yusei, Sherry and Elsworth.[4] Kaz and Jack continue to defeat leftover Diablo members before retreating off of the highway as Primo's powers caused mass destruction and weather abnormalities.[5] Kaz and Jack watch in amazement when Yusei stops Primo's powers with "Shooting Star Dragon". Jack later leaves Kaz to join Yusei.[6] 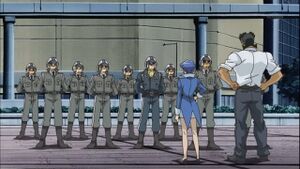 Kaz and other officers assemble.

When the Divine Temple begins to descend onto Neo Domino City, Kaz is one of the few security officers that voluntarily remained loyal to their job as many of the other officers escaped from the city in fear of their life. He works alongside the other officers in an attempt to control the civilians during the evacuation.[7] During Yusei's Duel against Z-ONE Kaz was seen cheering on Yusei.[8] 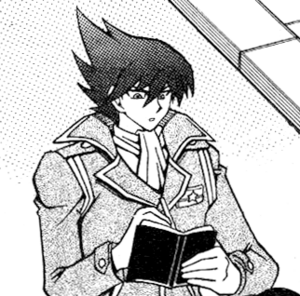 Kaz in the manga

In the manga, Kaz is a Sector Security officer like in the anime. After Sect knocked out Hunter Pace's minions, Kaz is seen taking the testimony of some civils who saw the scene.[9]