Kazuma Tsukumo is a character appearing in the Yu-Gi-Oh! ZEXAL manga. He is Yuma's father.

Kazuma is an adventurer together with his wife, Mirai Tsukumo. They gave Yuma his pendant, and taught him the "kattobingu" spirit, before disappearing.[1] Yuma claimed he could always "kattobingu", no matter how much people laughed, because he always had the pendant with him, and he felt like his parents were always cheering him up.[2] 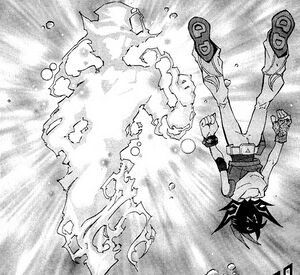 Kazuma cheers Yuma up through the Emperor's Key.

When Yuma had a Speed Duel with Thunder Spark and fell in the water, Kazuma talked to him through his pendant as he drowned, telling him to believe it, and to "kattobingu". Then, Yuma regained consciousness and managed to get out of the water and go on with the Duel with Astral's help.[3]

Later Kazuma appears in a flashback. Talking to his daughter Akari Tsukumo he explains that he wishes to find a door to the Astral World. He would later return to his daughter as a spirit and warns her about a great disaster that is about to happen and believes that Yuma is the only one who can stop it. Kazuma gives the Emperor's Key to Akari and tells her to give it to her brother before disappearing. Akari would then wake up believing everything to be a dream only to find the Emperor's Key on a desk next to her.[4]

Kazuma reappears in Yuma's Duel against E'Rah. Kazuma reveals to his son that he went in search of the Astral World in order to connect it to Earth and give it hope as it was originally filled with turmoil and misery. He reveals to his son that he along with Kaito, Ryoga, and Kyoji are priests of the Astral World that hold the power of Light, Air, Sea, and Land respectively. Kazuma also reveals that he was the one who sent Astral to Yuma. Kazuma then disappears but not before telling Yuma that he is proud of him.[5]