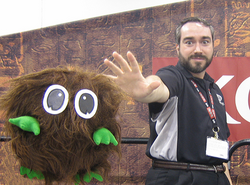 Kevin Tewart at the 2005 US Nationals.

Kevin Tewart (born 1970 or 1971) is Konami's current U.S. head of development for the Yu-Gi-Oh! Trading Card Game. He makes product announcements and, occasionally, ruling statements regarding the TCG. Before Konami took over distribution in Q4 2008, he worked at a top senior-level position for Upper Deck Entertainment on the TCG.

Tewart has often made appearances at events.

Tewart has made a number of announcements and ruling statements, including: