King of the Netherworld

From Yugipedia
Jump to: navigation, search
This article is about the character. For the Skill, see "King of the Underworld".

At first, he was only mentioned briefly by the Dark Signers' leader, Roman Goodwin in his rematch against Yusei Fudo. Roman described him as the "Ultimate God", the one that was said to be the mightiest of them all, and that the Earthbound Immortals served him.

According to Roman, it would appear if the four control towers for the original Ener-D Reactor were not activated before sunset, as by then, the door to the Netherworld would be opened.

After Akiza failed to seal the Lizard Tower before sundown, the Condor geoglyph then appeared in the sky toward the direction to where New Domino City was. After this, as the original Ener-D Reactor's light emanated from inside the B.A.D area crater, the King of the Netherworld emerged from it.

At first, it took the form of a giant mass of dark slime, but then began to mutate and acquired another distinctive shape. While the King of the Netherworld started on its path toward the formed Nazca Line, Kuribon warned Luna that they must not let it reach the Condor geogylph.

The Crimson Dragon also appeared and transported the Signers, along with their companions, to the Stairway to the Dragon Star, where Rex Goodwin himself was waiting. As he revealed his true identity as the final Dark Signer, with the Condor mark glowing upon his back, he explained that he must complete the ritual for the King of the Netherworld to gain its full power. Goodwin then proceeded to declare a Shadow Turbo Duel, which would be held within the Condor geoglyph, as the ritual to welcome the Ruler of the Netherworld, one which ultimately required Signers to be sacrificed.

After Rex Goodwin, Summoned "Earthbound Immortal Wiraqocha Rasca", the King spotted it and dispatched an army of smaller condors to attack Yusei, Jack and Crow (although in Signs of Doom Part 3, the King of the Netherworld managed to take out Jack on Goodwin's order). However, they were fought off by Ancient Fairy Dragon and Black Rose Dragon, which could be summoned by Luna and Akiza, thanks to the geoglyph.

After Yusei finally defeated Goodwin, the Crimson Dragon arrived, and used Yusei's "Majestic Star Dragon" to gain physical form in order to attack the King. The Netherworld´s ruler attacked them with a massive beam, but Yusei and the Crimson Dragon pierced through and entered the King`s body. The moment that Yusei was inside of it, he saw the defeated Dark Signers along with Goodwin, who had returned to his old self, as well as his brother Roman. 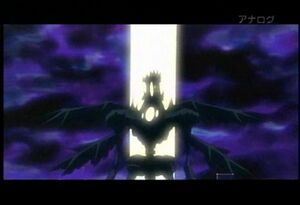 As both brothers thanked Yusei, they informed him that the other Dark Signers would be revived. However, both brothers decided to remain. After they crossed over into the light, Yusei and the Crimson Dragon passed right through the King, which disappeared soon after as a golden ray of light emerged from its body, and vanquishing it.