From Yugipedia
Jump to: navigation, search
For other version of this character, see Kit Blade (disambiguation).

Kit Blade, known as Yaiba Toudou ( Tōdō Yaiba) in the Japanese version, is a character in the Yu-Gi-Oh! ARC-V anime. He is the representative of Leo Institute of Dueling Synchro Summon course and one of Gong's mentors. 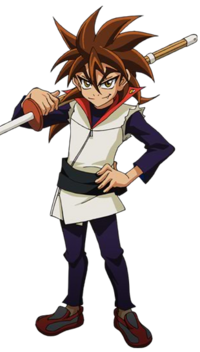 Kit is a slightly below-average height teen with long spiky brown hair and amber eyes. His canines appear to be longer than normal and often stick out of his mouth. Kit wears a dark blue long-sleeved shirt and pants under a sleeveless tan jacket with an orange interior (with his LID badge pinned on the collar), brown socks, and burnt-orange and grey shoes. He carries a wooden katana that he uses to find Action Cards in Action Duels; by swinging it hard enough to create gusts of wind that dislodge the cards; though his reaction to an apparent impending physical assault is to ready it, suggesting that he might also use it to protect himself.

Kit appears to be less arrogant and more confident in his skills than his friends, claiming (and arguably justifiably) that he was the strongest of his fellow Course-representatives. That being said, he's willing to acknowledge when he's in trouble or when he's actually impressed by his opponent. He also seems to hold some pride as a teacher, believing that the Synchro Summoning he taught to Gong might prevent Yuya from getting into the Junior Arc League Championship when they Dueled, and getting furious when Gong didn't defeat Grizzlepike effectively.

He demonstrates camaraderie with Julia and Dipper, though he was less supportive of her efforts to find Professor Marco; when she directly asked him to help, he did so, even breaking off his training of Gong.

Kit does have a slight mean streak, however, dismissing Julia and Dipper as weaklings, and after Yuya Sakaki asked Declan if he knew his father Yusho, Kit made some derisive comments about him. In the English dub, Kit nicknames Gong "Big Brows", much to the latter's irritation.

The first character which comprises "Toudou" means "sword". Also, "Yaiba" means "blade" or "edge (of a knife)" (something that is directly mentioned in the series proper when choosing an Action Field for Kit to Duel Gong.)

Kit, along with fellow LID course representatives Dipper O'rion and Julia Krystal, were tasked by Henrietta with defeating members of You Show Duel School in retaliation of the attack on Sylvio. After Dipper's loss and Julia's win, Kit was to Duel Sora Perse, but Sora pulled out and had Gong Strong take his place. Before the Duel, Kit commented to the group that unlike his predecessors, he was actually skilled. Gong only Summoned his 1000 ATK "Superheavy Samurai Kabuto for his first turn, a move that Kit deemed a waste of a turn. Gong retorted that true men made no wasted moves, and was seemingly proved right when Kit's Special Summoning of "XX-Saber Fulhelmknight" via "XX-Saber Boggart Knight" prevented them from destroying "Kabuto," as this triggered its defensive effect. But Kit proceeded to Synchro Summon twice, bringing out "X-Saber Souza" and "XX-Saber Gottoms."[3] He destroyed "Kabuto" and reduced Gong to 1500 Life Points, but was completely shocked by Gong's ace monster, "Superheavy Samurai Big Benkei," which was Summoned in Defense Position, and could attack with its 3500 DEF. It destroyed "Gottoms" with ease, but Kit was not only able to bring out another next turn, but use Action Cards to power it and "Souza" up enough to overpower "Big Benkei" and inflict Piercing Damage with "Meteorain," though "Big Benkei" survived thanks to the effect of Gong's "Superheavy Samurai Soulfire Suit." Noting the activation of the effect from Gong's hand, Kit used the effect of "Gottoms" to clear out Gong's hand, but that didn't stop Gong from drawing a monster that powered up "Big Benkei" to equal stats with "Gottoms" and destroying "Souza." Kit revived "Souza" and brought out his third "Gottoms," then attempted to remove "Big Benkei" from the field with the effect of "Souza". Gong was able to fend off the attack at the cost of his monster's DEF - which had been his plan all along, as this allowed him to use "Superheavy Samurai Soulbreaker Armor" to inflict enough damage to be victorious. It was at this point that Kit learned that Gong's Deck contained only monsters, and that his effects required him to have no Spell or Trap Cards in his Graveyard. Though impressed, Kit bounced the damage back at Gong, forcing Gong to use "Superheavy Samurai Soulbang Cannon" to end the Duel in a draw.[1]

During the subsequent Duel between Yuya Sakaki and Declan Akaba, Kit brought up the uncomfortable subject of Yuya's father when it was mentioned, prompting swift rebuke from Declan.[4] He was present when the group were alerted of the disappearance of Professor Marco, and he later went with Julia and Dipper to the site of the incident. One of LID's top team aces, Herc, explained that they were looking into the attack, pacifying Kit and Dipper, and causing them to admit their admiration for the top-team. Julia wasn't convinced, and she went by herself to the scene of the first incident.[5]

Later, after an attack on a trio of LID aces, Julia went out to the scene of that incident. Though they didn't appear as worried as she was, Kit and Dipper were apprehensive about the incidents, and noted that they could be next. Gong then showed up, apparently angry and intimidating Kit, who thought Gong wanted a rematch. Instead, Gong humbly fell on his knees and requested that Kit teach him Synchro Summoning, much to Kit's utter shock. Kit and Dipper were later contacted by Julia, who had found Dark Duelist who had attacked Sylvio and the man who had attacked everyone else. Kit contacted LID and Dipper and ran into Yuya Sakaki on the way. They explained to Yuya that they'd found the culprit of the assault incidents, and Yuya joined them, but when they got to the harbor, the culprits were gone. As they parted ways, Kit, likely having heard so from Gong, wished Yuya luck in getting into the Arc League Championship, though he added that it might be impossible for him.[6]

Kit took the time to train Gong on a shore platform, but he was interrupted halfway through by Julia, who had found Shay Obsidian, the Duelist that had attacked Professor Marco. Kit joined her and Dipper, suggesting that if they won, their opportunities would widen, and suggesting that they play by Battle Royal rules. After Dipper returned Shay's three "Raidraptor - Vanishing Laniuses" to his hand, Kit used "XX-Saber Hyunlei" to destroy his Spell and Trap Cards, and "Gottoms" to wipe out his hand, leaving him apparently defenseless for Julia to take down. But Shay used "Raidraptor - Readiness" to survive the game-ending damage, and after claiming that the three students' Dueling lacked determination and strength, he brought out the 100 ATK "Raidraptor - Rise Falcon," and though Kit initially mocked it, "Rise Falcon's" effect allowed it to attack all of their monsters and gain their combined ATK, and it wiped Kit and his friends out in one swoop.[7] Kit wasn't sealed into a card like most of Shay's other victims, as the arrival of Declan and his subsequent truce with Shay prevented Shay from taking action, and his memory was wiped and altered to remove his memories of Shay and make him believe that Shay had always been a part of LID.[8][9]

Kit watched Julia's Duel with Zuzu, and was concerned when she was pushed into a corner and after the attack that caused her to lose caused her to fall, but he and Dipper were relieved when Zuzu's monster saved her.[10]

On the second day of the tournament, Kit watched his "disciple", Gong's, first match against Grizzlepike Jones. He wasn't pleased when Gong's strategy to Synchro Summon was countered, as it made him look bad, and confused as to why Gong appeared to be panicking. Gong was eventually able to Synchro Summon and win, much to Kit's relief.[11] He watched Shay's Duel with Sora Perse, pleasantly surprised by Shay's skills.[12]

Shortly before his first match of the Arc League Championship on the final day of the first round, Yuya asked Kit if he could see Shay, but Kit explained that he rarely talked to them, but allowed Yuya to watch his match and promised not to disappoint him. During the Duel his opponent, Iggy Arlo, continuously attacked him physically to prevent him from getting Action Cards and defeated him with an OTK, leaving Kit badly injured.[2]

When the Arc League Championship was cancelled to reveal the existence of the Fusion Dimension invaders, as well as the Lancers selection, Kit (still bandaged from his injuries after his loss to Iggy) and Julia concluded that Dipper was one of their victims and considered becoming Lancers themselves.[13]

After Z-ARC's defeat and the rebirth of the Standard Dimension into the "Pendulum Dimension", Kit lost his memories of Zuzu and the events involving people from other dimensions. He was present during the Battle Royal with Dipper and Julia.[14] He was later seen watching Yuya's Action-Turbo Duel against Jack Atlas with Dipper and Julia[15] and applauded when Yuya won. He then watched Yuya and Declan's Action Duel.[16] He was pleased when Yuya won the Duel and witnessed Zuzu's revival.[17]

Kit uses an "X-Saber" Deck[1] focused on Synchro Summoning "XX-Saber Gottoms" and swarming the field with Synchro Monsters, then using the effect of "Gottoms" to clear his opponent's hand.