Konvoy Sagawa (コンボイ Konboi Sagawa) is a character in the Yu-Gi-Oh! SEVENS anime and a minor antagonist. She resembles Celestia Noodlina, Finger Chikako, Sweets Kakoko and Flash Umiko; she and Hire Yureko are introduced as their counterparts, and collectively work under Otes. 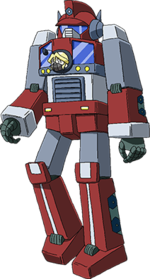 Konvoy Sagawa differs substantially from her five counterparts, even more so than Flash Umiko. Like her counterparts, she appears to be a petite young girl with a light yellow complexion, blond hair, and aqua eyes with blue pupils and yellow ring-shaped highlights. She seems to have the same ring of hair, but it is largely contained within the massive robot body she is housed in, and the lower half of her face is covered by a grey mask.

Sagawa is contained within a robot body that resembles a Transformers robot; Optimus Prime in particular, which has a maroon head, forearms, calves, upper torso, and hips, grey upper arms and thighs, and a lighter gray midsection. The limb joints resemble the surfaces of tires, and the limbs have hexagonal blue patterns on the sides, The torso, from which Sagawa's head emerges, resembles the front of a cab-over semi truck.

Sagawa was present with Celestia Noodlina, Finger Chikako, Sweets Kakoko and Flash Umiko at the Nanahoshi Insect Ninja Village when Hire Yureko brought Yuga Goha to them. They strapped him to a cross and introduced themselves, Yureko telling Yuga where he was. Otes then arrived to send a video message to Yuga Ohdo while informing Yuga Goha of his plans to destroy Dueling; unilke her counterparts, Sagawa did not participate in filming the message.[1]

Sagawa and her counterparts joined Otes in the Otes Robot, waiting beyond the lunar horizon for Yuga Ohdo and his friends to arrive and attempt to stop the lunar Drones from overloading the Goha Duel Server. They acted to throw meteors at the kids' shuttle, but after the second the shuttle vanished. To their shock, the kids had commandeered the Super Rush Robot so Yuga could Rush Duel Otes.[2]