Koyo Hibiki (響紅葉, Hibiki Kōyō) is the younger brother of Midori and a three-time Duel Monsters world champion. Koyo was a great Pro League Duelist who used "Elemental Heroes" and is the former owner of the "Elemental Hero" Deck used by Jaden in the series, as well as the owner of "Winged Kuriboh".

In his youth, Koyo was given the "Winged Kuriboh" card as a prize for winning a tournament by Maximillion J. Pegasus. Before the series proper, Koyo was able to rise to the position of World Champion. However after losing a Shadow Game to a mysterious Duelist, he found that every time he drew a card while Dueling seriously, the Deck of his heart would be depleted, at which point he would die. The Duel was erased from his memory. Koyo suffered from this and was sent to the hospital where he met a young Jaden who had broken his leg while playing baseball. He taught Jaden all he knew about Dueling and to always have fun Dueling no matter what. 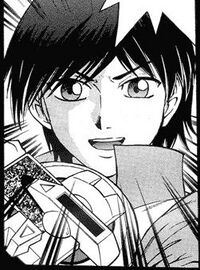 Koyo before he Duels Jaden and passes his Deck to him.

With Jaden's encouragement, Koyo left the hospital for the local tournament and quickly rose to the semi-finals. After the Duel, he was approached by Chazz, who received an autograph from him, and in the process, Koyo's "Winged Kuriboh" altered Chazz's "Light and Darkness Dragon" card. Before he could continue the tournament, Koyo fell faint, and he was returned to hospital without Jaden seeing him Duel. With his health failing, he decided to give up Pro-Dueling and made Jaden his final opponent. Though both Duelists used their powerful "Elemental Heroes," the effect of "Winged Kuriboh" allowed Koyo to beat Jaden in the end, by a blow from "Elemental Hero Terra Firma". After defeating Jaden, he gave him his Deck and his lucky red jacket. However, he found that in this he had drawn the last card, completing the curse and falling into a permanent coma, presumably kept alive by Winged Kuriboh.

He is revived after Jaden and Chazz defeated Tragoedia, and faced Jaden in a Duel once more upon the conclusion of the manga.

Koyo plays an nature-based "Elemental Hero" Deck. Before the start of the manga, Koyo gave Jaden his Deck, including the one-of-a-kind "Elemental Hero Terra Firma" card.

The list given here are only the cards he was actually seen using. Jaden has used many other cards that could be assumed to have formerly been his, but it's also clarified that Jaden modified the Deck since receiving it. In addition, Koyo allowed Jaden to keep "Winged Kuriboh" when he gave the rest of the Deck back.