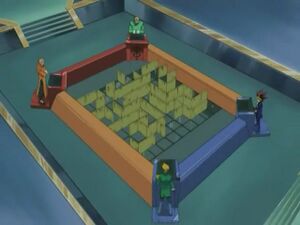 The Labyrinth Duel in the anime.

A Labyrinth Duel in the Duelist Kingdom part of the anime and manga is an altered set of rules to Duel Monsters that occurs when "Labyrinth Wall" is put into play. The gameplay of Yu-Gi-Oh! The Duelists of the Roses is similar.

One such Duel occurred when Yugi Muto and Joey Wheeler Dueled the Paradox Brothers.

A Labyrinth Duel is considered part of the Duelist Kingdom rules, so all the basic rules from that tournament still apply.

Yu-Gi-Oh! volume 11: "Dungeon of Doom" included rules for a Duel Monsters Labyrinth Battle Game. At the end of the volume there was a set of rules along with pictures of cards and a grid which could be photocopied and cut out. 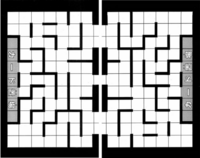 Each player gets 1 copy of the photocopied cards. They choose up to 7 of the cards so that the total number of Level Stars is 20. Each player places their 7 monsters in their provided Card Base on the grid.

When a player's card is in Attack Mode and stops next to an opponent's card they may battle. Cards that lose a battle are removed from the game.